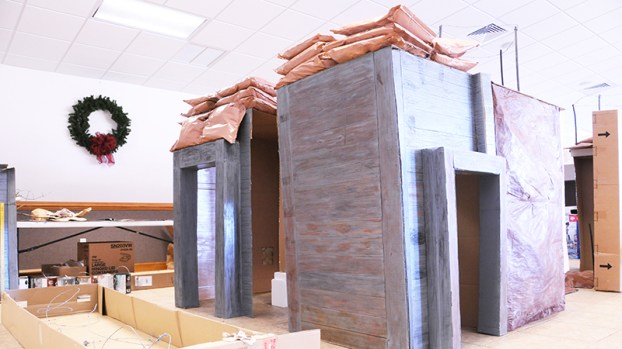 Shown is the British side of the float. | Andrew Garner/Atmore Advance

A small piece of World War I history will be on display at the Atmore Area Chamber of Commerce’s annual Twilight Christmas Parade this Saturday.

Brooks Memorial Baptist Church’s float, which is called the World War I Christmas Truce of 1914, sticks to the parade’s theme of Traditions of Christmas. The float depicts a scene between the Germans and British on Christmas Day.

Skylar Allen, one of several float builders, said a while back, former broadcaster Walter Cronkite did a memorial on the truce and he found it beautiful.

Allen said during the war, soldiers on both sides had been killing each other for about four months.

“The war started in July 1914, and the Germans, British, French, Irish, Australians; a lot of people were involved in it,” he said. “On Christmas, they were sick of it. They had a 500-mile front going down the North Sea to the south of France. All up and down the front, the men had Christmas instead of fighting.”

Allen said men didn’t stop fighting all along the front, and added that there was still shooting occurring.

“Most of the places they had spontaneous Christmas truces,” he said. “In one place, the most famous, the Germans started calling them out. The Germans had candles on broken dead limbs.

“The British saw those and heard the Germans sing ‘Silent Night,’” he said. “The Germans hollered at them to come. They came out and started celebrating Christmas. They had a soccer game, exchanged pictures, cigarettes and chocolates. By daybreak, and it continued on until Christmas day, the high command told them to quit that and resume shooting.”

For the rest of the war, the Christmas truces never were done again, Allen said.

Allen said he believes the truces were put together because of the meaning of Christmas.

“It was all about Jesus and love,” he said. That’s why we’re doing it. Even though it was an insane time during the war with the tear gas and tanks and submarines. All of that stuff was new. All of it was a terrible way to kill people.

“Before it was over with, a lot of them were shell shocked,” he said. “The thing of it is, that for a few hours on Christmas, they could of ended the insanity, and spend Christmas Day with each other.”

Allen said the float has sand bags, dirt and barbed wire on top. The end of the float with the wooden structure is the British side, and the end with the metal roofing is the German side. Both sides are separated by a wooden plank, and serves as no man’s land.

Allen said, along with himself, Randy Clark, Minister of Music Jeremy Jones, Trent Martin and Lisa Ferguson have been working on the float on a consistent bases over the last couple months.

When the parade is over, the float will be used in Brook Memorial’s Christmas Cantata on Dec. 17.

Morning radio show listeners will be without a familiar voice on 105.1 WPFL-FM as Lou Vickery is stepping down from... read more