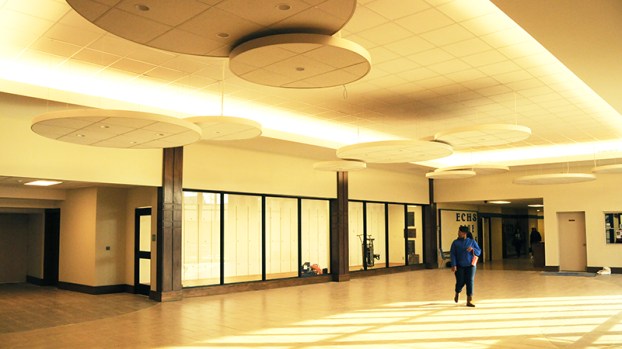 Renovations near completion at ECHS

Escambia County High School officials said last week that they are pleased with the renovation work that’s nearly complete at the Atmore school.

For just under a year, construction crews have been working on gutting and renovating the school’s auditorium and front lobby.

ECHS Principal Dennis Fuqua said with the size of this project, the crew has done a good job while working at the school.

“We’re well pleased, and they were easy to work with,” he said.

Fuqua said that the whole project is about 97 percent complete.

“It’s that close,” he said. “The only thing lacking in the lobby are some shelves for the trophy case.”

Fuqua said a set of glass doors will be installed this week, and sound techs were at the school last Wednesday and should be gone by the end of the week.

“Then, it’ll just take a good cleaning,” he said.

Additionally, Fuqua said the dressing room addition in the back of the school is some four weeks out from completion.

Some of the improvements made in the auditorium include taking out the orchestra pit area and extending the stage by 30 percent; adding new curtains; new lighting system; sound system; installing a floating ceiling; and taking out a lot of the angle in the decline, Fuqua said.

“There are new seats, and an addition of a sound booth has been made as well,” he said.

Once the work is done, an architect and inspector will perform a final inspection before turning the project over to the board, Fuqua said.

Around two weeks ago, David Strawbridge made the decision that an alleyway in Atmore needed a little more color. After... read more