Rice to not seek judge’s seat

Escambia County Circuit Judge Bert Rice announced Monday he has chosen to not run for reelection this year. 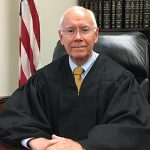 Rice has been a judge, whether as a city judge for the city of Atmore, or in his current role, for 40 years. He served the city of Atmore for more than 20 years, and was elected as a circuit judge in November 2006.

Rice will serve out the remainder of his term until January 2019, when he’ll officially retire. He said he chose to make the announcement now because the start of qualifying for Republican elected positions began on Jan. 8.

He said he’s grateful for the opportunity God has given him to be a judge for the citizens of Atmore and the county.

“My dear sweet wife, Jan, I’m just so appreciative of her support and encouragement,” he said. “There are a lot of challenges that face judges. Family support has always been so important.”

Rice said it’s been an honor that he’s ran unopposed.

“I really appreciate the fact that the county bar has been supportive enough that no one chose to run against me,” he said.

As a circuit judge, Rice judged everything from divorce cases to serious criminal cases, including capital murder and rape trials.

Recently, Rice finished up a nine-week medical malpractice trial. The trial was the longest in county history, he said.

While as a city judge for Atmore, Rice also wore the cap of assistant district attorney.

Rice said for his final year as a circuit judge, he will be going full speed.

“My intentions are to move as many cases as I can over the next year,” he said. “When I officially retire, I’ll retire on an active status.”

“I’m not retiring right now,” he said. “It will be my intention to have a docket (after January 2019), but it won’t be as large as my present docket. I’ll be able to continue to handle certain cases here in Escambia County and also in Baldwin County.”

For many years, Rice has served as the presiding judge during the annual Law Day Celebration every May.

Rice said in the end, he decided to not run again because it was time.

Each year United Bank employees pledge their support for United Fund of Atmore through payroll deduction. To support its employees... read more