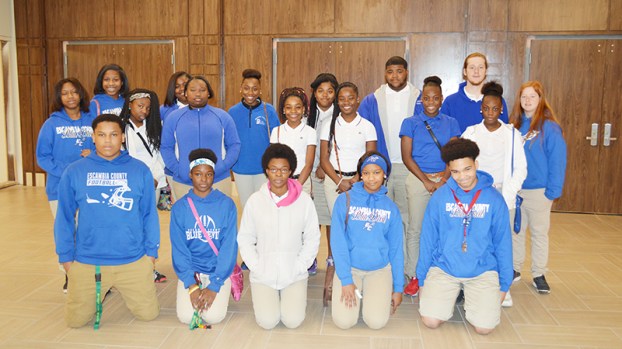 Escambia County High School is seeing a lot of double as the Atmore school is home to 11 sets of twins, school officials announced recently.

“The yearbook and newspaper staff conducted a survey of several of the twins,” ECHS Yearbook Sponsor Leslie Sellers said. “The staff asked the twins about their favorite memory growing up as twins.”

Mia and Madison Simmons said they enjoyed swapping places at school because the teachers could not tell them apart.

Makayla Gaines said her favorite memory with her twin Marques is “when we dressed as French Fries on our birthday when we were younger.”

Additionally, the staff asked what their favorite thing is about being a twin.

Lashantia Riley said her favorite thing about being a twin is having the same birthday.

Ke’aira Weaver’s favorite thing about having her twin, Ke’erica, is she always has someone to talk to.

“Many of the twins said some of the things they dislike the most about being twins is having the share belongings, dressing alike when younger, arguing a great deal and being announced as one person, such as ‘Madison and Mia Simmons,’” Sellers said.

Twins have been associated with products and televisions shows for many years, including Mary Kate and Ashley Olsen in “Full House” and Tia and Tamera Mowry on “Sister, Sister,” Sellers said.

“You can definitely find yourself seeing double on many occasions throughout a normal school day.

Bundle up and be safe. There is a chance wintry mix and some snow will fall on Atmore tomorrow night... read more