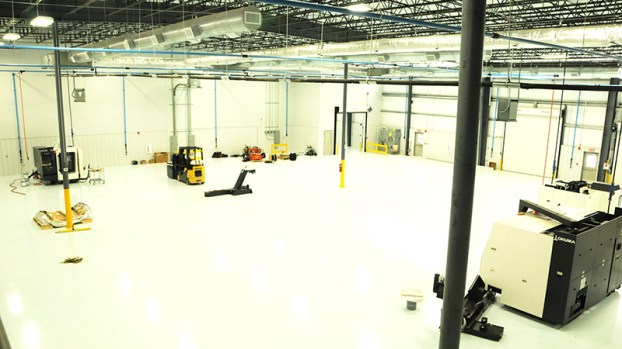 Recently, Maxwell Construction Co. put the finishing touches on the major project that sits in the Rivercane Industrial Development, right next to Interstate 65.

The massive building’s concrete foundation, which was poured to withstand some 4,000 pounds of pressure per square inch, was laid last March. Construction of the building began wrapping up last June.

Paul Speegle, who is over quality at Brown Precision, said the building was built the right way.

“Everything in here is done right,” Speegle said.

At present, there are a few machines on the main floor with several more slated to be installed in the next few weeks.

Speegle estimates that they should be making parts within the next couple of weeks, maybe more.

One of the building’s features includes a break room with a 7-inch think concrete ceiling.

Speegle said the room acts as a tornado shelter, if needed.

On one side of the building, the fluorescent penetrant inspections and plating processes will be done.

In the building’s quality lab, the HVAC unit keeps the temperature always at a plus/minus ratio of 1 degree, Speegle said.

Sitting not too far from the building is a 6-acre pond, which once filled, will be filled with fish that employees and their families can fish out of, Speegle said.

Brown said the most recent job fair for the company was to hire around six people.

In the first year, the company plans to hire between 30-40 people, he said.

Brown said the goal is to isolate the production side of his company in Atmore, and allow the Huntsville arm to be the creative side.

Brown said they wouldn’t have been here without the help of the city of Atmore, Mayor Jim Staff, the Poarch Creek Indians and the Industrial Development Board.