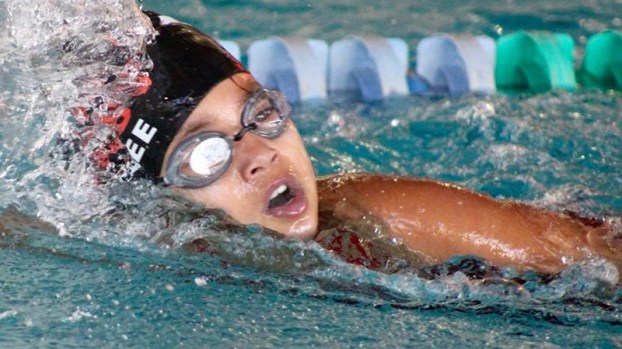 The PCST Swim Team traveled to Gulf Shores recently to compete in the 2018 SE PNY Polar Bear Invitational Swim Meet. The swimmers who attended were Sophia Ikner, Aubree Wiggins, Hannah Johnson, Kamryn Langham, Kylee Langham, Abby Ross and Kennedi McGhee. The swimmers competed both Saturday and Sunday and on their off time visited the sights in the area.

Sophia Ikner, daughter of Danielle Sanspree and Heath Ikner, competed in 10 events. She swam a personal best in her 25 backstroke event. She won two of her heats.

Aubree Wiggins, daughter of Tysen Rolin and Taylor Wiggins, has been swimming since she was 5 years old and has just gotten better in all of her strokes, coach Sarah Allen said. Aubree dropped time all 10 of the events that she competed in. She swam some personal best times and also had no disqualifications on Sunday.

Kennedi McGhee, daughter of Tommy and Tracy McGhee, competed in a total of eight events. She won several of her heats and will compete this summer.

Abby Ross, daughter of Stephen and Regina Ross, competed in 10 events and placed in the top eight in all of her events. Abby was part of two relays that placed third and first overall in the 10 and under girls division. She will attend the Rising Tide Swim Camp this summer in June to work on her technique.

Hannah Johnson, daughter of Chad and Monica Johnson, just recently started back swimming after taking a break for a couple of months. Hannah is a distance swimmer and did amazing this past weekend, Allen said. She competed in her first 500 freestyle event and completed it in under ten minutes. She dropped tremendous time on all of her events.

Kamryn Langham, daughter of Cade and Gia Langham, swam a total of ten individual events and two relays. She finished in the top six in every event and finished fourth overall at the meet.

Kylee Langham, daughter of Cade and Gia Langham, competed in ten individual events and three relays. Kylee recently moved up to the 9-10 girls age division and is holding her own has she competed with ten year olds. She finished in the top five in every event and helped out on three relays.

“Kylee is a talented swimmer and will go far. She will be eligible to compete in the 2024 Olympic trials if she chooses to,” Allen said.

“Every swimmer this weekend did a great job and they are striving to get better with practice and time,” Allen said. “In order to be a great swimmer you have to have heart and dedication and the drive to make yourself practice. A swimmer is competing against the clock to get faster times in order to move on to compete at the National level. Our swimmers are doing their best and getting better with time.”

Even if Escambia Academy began its 2018 baseball season earlier this week, the future is bright for the program, coach... read more