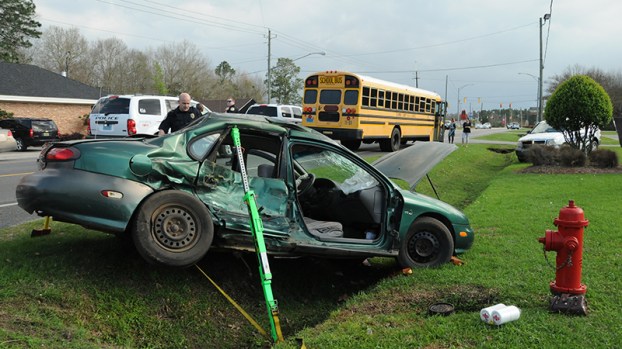 Two Frisco City women were injured in a two-vehicle wreck involving a school bus on March 1 at the intersection of Hwy. 21 and McRae Street, according to an Atmore police report.

Maxine Smith, 66, of Frisco City, the driver of a Ford Taurus, and Mary Owens, 77, the passenger, were leaving a parking area, and didn’t see the bus approaching, the report said. The wreck occurred at approximately 3:04 p.m.

According to the police report, there were 10 students and one rider on the bus, but none were injured.

“When officers arrived on scene, two subjects (Smith and Owens) were trapped inside of the vehicle,” the report stated. “Both were injured and conscious.”

Atmore fire and emergency personnel extracted Smith and Owens from the Taurus, and were transported by Atmore Ambulance and ASAP to a nearby hospital.

The bus driver, Rose, was also taken to the hospital by ASAP for chest pains.

One-hundred-and-nine points. That was the margin of victory for Escambia Academy’s boys track and field team in their first home... read more