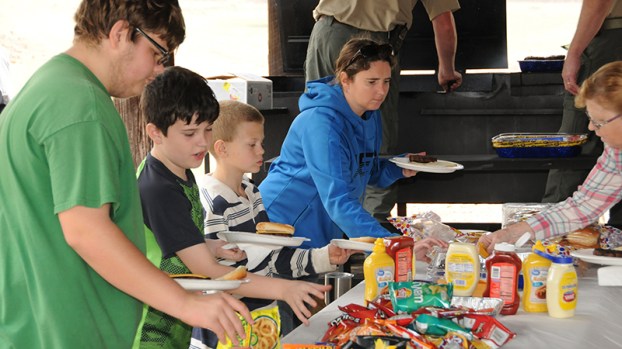 State legislators, county commissioners and other dignitaries were in attendance for the event that marked the opening of the park that’s just outside of Atmore. The park has been closed since last January when the Iron Man group stopped managing it.

“It was a tragedy to have it closed,” Sen. Greg Albritton said. “I can say there is going to be a united attempt to keep the park open.”

Rep. Harry Shiver, who visited the forest park as a youngster, said the legislature is going to try and get everything like it used to be at the park.

Those with the AFC present spoke about the need to make sure somebody comes and uses the forest and recreational area.

“We’re going to have to have somebody to go into a partnership in coming to the park,” Gary Cole, state forester, said. “Everybody needs to come and use this place.”

Cole said there might be some hores back trails for riding for trails sometime soon.

State Forester Rick Oates said the AFC is still looking for a manager for the park.

At present, the park will be a day use only on Saturday and Sunday, and may become a primitive camping and RV site in the near future, officials said.

“We are going to dip out toes in to see how we can manage it,” Oates said previously. “Our agency is limited in funds for park management, but the public really enjoys using it. The more I’ve learned about it the more excited I’ve become.”

Cole, a retired forester, and who has a passion for the park, was rehired for the relaunch.

The park will be open 8 a.m. until sunset on weekends.

GOING ON A TOUR