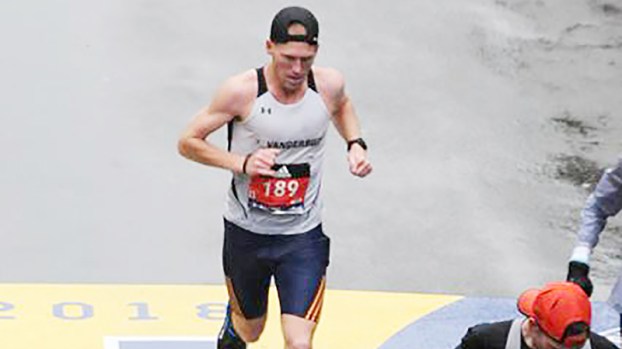 Ash did all of this in adverse conditions, as the weather in Boston was wet and rainy. He ran in temperatures in the 40s.

Ash said the weather didn’t effect him much because there were so many other runners who were battling the elements.

“The nice thing about the Boston Marathon is that there are so many people,” he said. “As the wind got bad, you could tuck behind people. It was about 40 degrees, and 15-20 miles an hour winds. The rain could get tough at times, but you’ve just got to keep your eyes fixed on your pace and fighting.”

For Ash, though, he wanted to give God glory while running.

“It was my fifth time doing this so I kind of knew the lay out of the course,” he said. “I tried to spread my pace and my energy during that time. I’ve been at the top 100 the last two years, and I wasn’t expecting to finish that high. I was able to catch a lot of people the last few miles.”

Ash acknowledged that the finishing times for many were slower this year because of the weather.

He said his strategy during the race included setting a pace for the first 20miles, and then cranking it up the last 6 miles.

“I wasn’t really able to drop my times,” he said. “I kind of had more in the tank, and when I saw my parents (Alan and Dale Ash) with a little more than a mile to. That energized me.”

Ash also said that constant prayer throughout the race carried him through the marathon.

Once the race was over, Ash said the toughest thing he thought he had to do was walk a mile back to the hotel.

“When you’re running you generate your own heat,” he said. “When you shut it down, it’s tought putting one foot after another.”

Three of the last five years, Ash said he had to go to the medical tent, but this year he didn’t have to visit the tent.

“They give you a jacket to keep warm, and that was when my lungs started seizing up,” he quipped. “Once I got back to the hotel, I took a hot bath and soaked.”

With his overall finish, Ash qualifies for next year’s Boston Marathon.

He said he’s thankful for the opportunity to race in Boston because it’s a race he trains for all year.

“It’s one of the highlights of the year for me,” he said. “I’m just thankful and grateful to do this every year for the past five years, and that God has allowed me to be a steward of his gifts.”

For the fourth straight year in a row, Escambia Academy won the overall AISA track and field title today at... read more