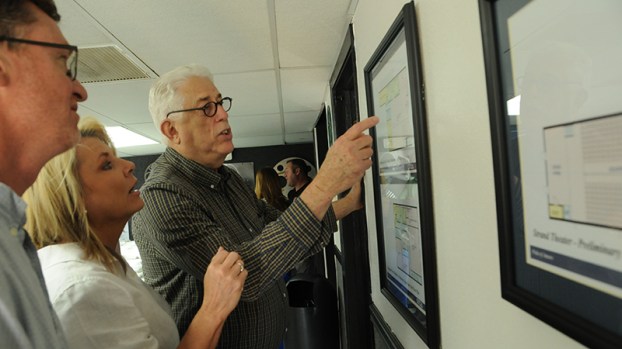 The talk of Atmore is going to be obvious real soon.

Officials with McClure Engineering unveiled the action plan to help revitalize downtown Atmore on Wednesday in front of a packed crowd at the Strand Theatre.

For the past two months, Zach Mannheimer — principal community planner with McClure — and engineering officials have been working on ideas of how to take the Strand Theater and bring it back to life. Mannheimer has visited Atmore several times over some five months getting feedback from the community on what it would like to see downtown.

The action plan centers around the Strand Theatre and the two properties on either side — the former hardware and Radioshack stores.

“Atmore is perfectly positioned geographically to take advantage,” Mannheimer said, adding that once the effort is complete, people will begin to make their way here.

Mannheimer said the action plan, which is split up into three sections covering four buildings, is the culmination of ideas from the community.

Mannheimer said the plan can and will more than likely change over time, but it will take between 12-24 months to come to fruition.

Additionally, McClure collaborated with Rolin Construction Co. to determine the cost of the action plan, and a firm in Pensacola, Fla. for the design.

The action plan breakout by building is as follows:

Bigfoot visits, performs at Atmore dealership Jumping over a Boeing 727 from wing to wing doesn’t take any time at... read more