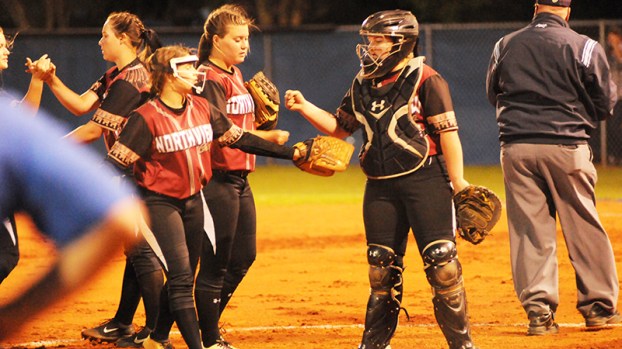 The 22-year rivalry between Northview and Jay, Fla. notched another thrilling chapter in their belt.

Northview scored four runs in the top of the sixth inning to cut the game to two runs, but Jay’s stellar pitching and defense held out in the end as the Lady Royals won 8-5 tonight to win the FHSAA Class 1A, District 1 championship.

Trailing 7-1 in the sixth, the Lady Chiefs strung together some key hits as Valen Shelley hit a two-run single and Tori Herrington hit a two-run double, all with two outs, to make it a 7-5 game.

Jay’s Christa Sanders scored in the bottom of the sixth on a RBI single from Sarah Barnhill.

The Lady Royals scored two runs each in the first and second innings, and one in the third to take a comfortable lead.

The lead helped Jay’s Alyssa Baxley, who recorded 11 strikeouts and a complete game in the win.

Northview’s Ashley Ragsdale went 2-for-4 with a double; Shelley went 1-for-4; and Herrington went 1-for-2 to lead the Lady Chiefs.

Sanders went 3-for-4 to lead the Lady Royals. Baxley, Barnhill and Haylee Watson had one hit each.

Both teams advance to the regional tournament next Thurs., May 3.

More information on the regional tournament will be posted on our website at a later time.

The talk of Atmore is going to be obvious real soon. Officials with McClure Engineering unveiled the action plan to... read more