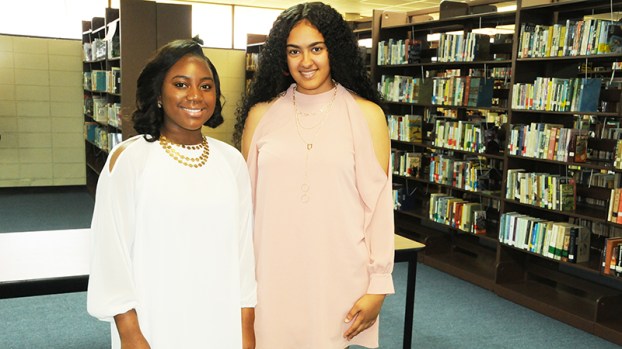 Escambia County’s valedictorian and salutatorian said the hard work and effort one puts in their schoolwork and extra curricular activities is worth it in the end.

Seniors Keyaira Wilson is the class of 2018’s valedictorian, and Zaria Smith is the salutatorian.

“In our senior year, they worked us a lot,” Smith said. “It was challenging. During our previous years, we were laid back, but this was something new.”

Smith said for her, it was an English class she took this year that really pushed her to excel. She added that during her ninth and 11th grade years were less stressful.

Wilson said she’s had a good time while at ECHS.

At present, Wilson has built enough college credits to earn her associate’s degree.

While at school, Wilson and Smith have been involved in several school organizations including Future Business Leaders of America, Scholars Bowl, Math Team, HOSA, SGA, National Honor Society and Peer Helpers, to name a few. Wilson is also an Atmore Area Chamber of Commerce Ambassador.

Wilson said it’s important to stay busy because one can make many memories.

“It’s important because you stay busy,” Wilson said. “You get to make memories. You get one chance. It’s best to fill it up with memories.”

Smith said if you’re involved in several activities, it helps not only the community, but you become a visible representation of the organizations.

Smith will graduate with a 3.97 grade point average (GPA). Wilson said she doesn’t know her GPA, but it’s “higher,” she quipped.

All jokes aside, both Wilson and Smith did compete against each other in school. Their competition began in eighth grade.

“We’ve been friends so it’s kind of like a friendly competition,” Wilson said.

ECHS will hold graduation ceremonies on Fri., May 25, at 7 p.m. in the football stadium.

After graduation, Wilson and Smith are going into the United States Air National Guard. Additionally, both are planning on attending Auburn University-Montgomery to further their studies.

Both said the rest of the top 10 of ECHS, which includes Terriana McNeil, Lazarrian Boykin, Josaline Hollinger, ShaDiamond Harris, Adrienne Tedder, Diamond Kidd, Alleria Brooks and Destiny Freemon, have all been motivating and supportive, but most importantly, good friends.

“The top 10 is very close,” Wilson said. “It’s a good accomplishment. When they leave high school, they’ll leave an imprint.”