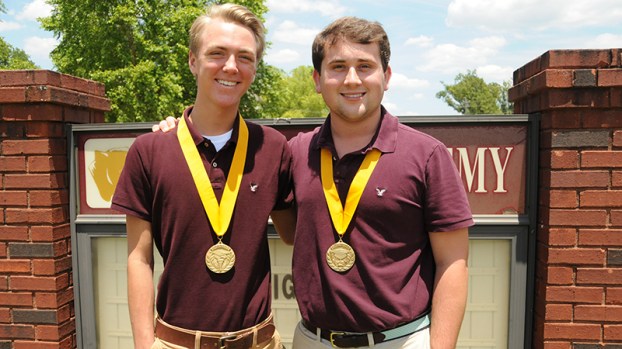 Escambia Academy’s valedictorian and salutatorian said they’ll never forget how much their teachers valued them as students while at the Canoe school.

EA’s valedictorian is Jackson Breckenridge, and the salutatorian is Austin Williams. Breckenridge’s grade point average is a 4.51, compared to Williams’ 4.49.

Williams said he describes his time at EA as one where the teachers helped him a lot. Jackson echoed Williams.

“I’ve been going here since the first grade, and EA’s been through a lot of changes, but it’s consistently stayed student oriented, which is a good thing,” Breckenridge said. “We have more of an attachment to the teacher. They generally want to see us succeed.”

Both are involved in a slew of activities at EA, including the Student Government Association, the Beta Club, the Scholars Bowl, the Math Team and others. Additionally, both said extra curricular activities change during any given year.

Graduation for EA is slated to take place tomorrow night at 7:30 at First Baptist Church in Bay Minette.

Sometimes the top two of graduating class tend to compete against one another.

For Breckenridge and Williams, it was about competition, but in a different manner.

“I feel like it was always because they never tell you where you are in line, and we’d always create different scenarios to see who’d be valedictorian and salutatorian, and those at one through five,” Breckenridge said.

Williams said at every honors day while in high school, it felt as if it was Breckenridge and himself at the top.

This fall, Williams will be attending Coastal Alabama Community College, and is aiming to study pre-dental.

Breckenridge is headed to the University of Alabama, where he is slated to major is biomedical science and minor in Spanish.

Both said they are looking forward to graduation tomorrow night. The seniors’ last day was Monday.

When asked if there was any advice they’d like to give to the younger students, both said to not give up.