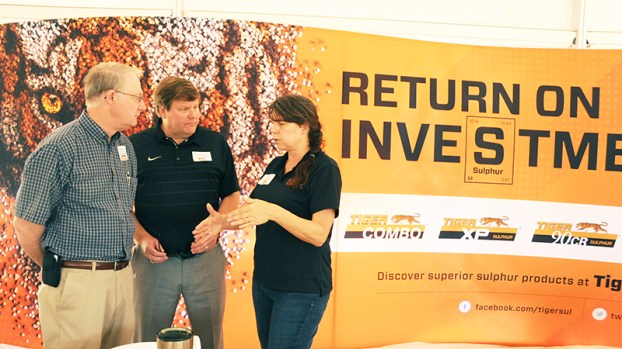 Tiger-Sul’s Atmore plant celebrated its grand re-opening on May 15 at its facility on Hwy. 31.

The grand re-opening was held less than a year after its plant was destroyed by fire on July 29, 2017.

Additionally, the event was held to honor the contributions of those who helped facility to start full production less than nine months after a lightning strike and subsequent fire knocked it off line, according to a release. The plant returned to full production during the latter part of April of this year, and with the installation of four new high-capacity stainless steel belts, the company can increase the production of sulphur bentonite and micronutrients by approximately 150 percent compared to the capacity before the fire.

“After the fire swept through the plant last July, there was never any doubt that we were going to come back bigger and better than ever,” Tiger-Sul President and CEO Don Cherry said in a release, and added those sentiments at the event. “I’m proud to say that Tiger-Sul is committed to Atmore, and we truly appreciate the support we’ve received from Mayor Jim Staff and Fire Chief Ronald Peebles, and the Atmore community as a whole.”

Tiger-Sul Products LLC is the global leader in Sulphur bentonite micronutrients technology and other well-established crop performance products. Tiger-Sul is the largest producer of sulpher bentonite in the world, and has been in operation since 1964. The Atmore plant started producing in the 1970s.

In Atmore, the plant is located on 38 acres, and the newly constructed facility is more than 23,000 square feet in size, and the warehouse has a storage capacity of more than 2,000 tons, making the Atmore facility the largest sulphur bentonite plant in the U.S.

With the return of its production, Tiger-Sul resumes meeting the need of customers in the eastern, southern, northern and Midwest regions of the U.S. through Atmore.

Escambia Academy’s Cassidy Murphy (center) signed to play basketball with Judson College on May 10 during a ceremony at the... read more