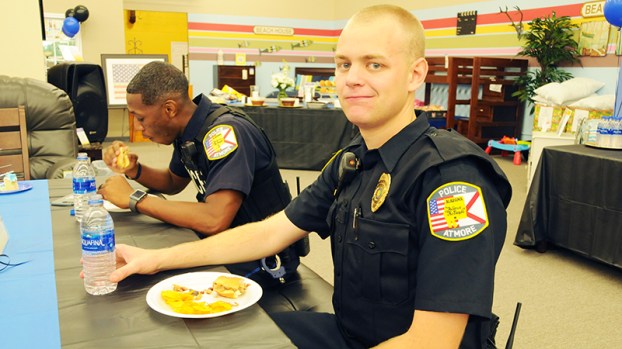 For Jodi James, police officers hold a special place in her heart.

Jodi is the wife of Ryan, a shift commander with the Atmore Police Department, and last week, she along with Missie and Tom Tschida, and others, provided a meal for police officers during National Police Appreciation Week.

The meal was held at Farmer’s Furniture in Atmore, and several officers came by for a meal, which included pulled pork, chips, potato salad and other items.

“This is just a give back,” Jodi said. “These officers could’ve chosen any other job that they wanted to do. Ryan could’ve done anything he wanted to do.

“They choose to protect everyone of us,” she said.

In 1962, President John F. Kennedy proclaimed May 15 as National Peace Officers Memorial Day, and the calendar week in which it falls as National Police Week.

National Police Week was established by a joint resolution of congress in 1962, and it pays special recognition to those law enforcement officers who have lost their lives in the line of duty for the safety and protection of others, according to the National Law Enforcement Officers Memorial Fund website. Additionally, the week is also held to honor America’s law enforcement community.

Missie said it’s important to thank law enforcement for their sacrifice that they make every day.

“It’s important that they know how appreciated they are,” she said.