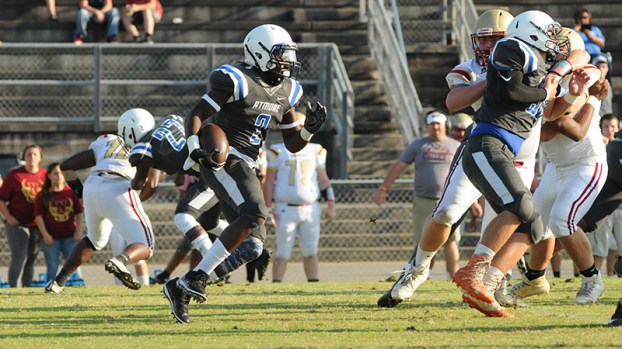 Spring football is over for area schools.

Escambia County and Northview finished in a 14-14 tie in varsity action on May 18, and the junior varsity finished scoreless in a spring game in Bratt, Fla. Escambia Academy played Snook Christian on May 15.

Area coaches said they were pleased with their players’ effort on the field during spring training.

“I think we’re much improved from last year,” ECHS head football coach Rico Jackson said. “I thought the kids played well. I felt like we left some points on the field, and the kids know that.”

ECHS held the ball for a more-than 11-minute drive in the first quarter against NHS, and led 14-0. NHS battled back in spite of the deficit.

NHS head football coach Derek Marshman said the boys played with a lot of intensity during the game.

“I was pleased with the kids’ effort, intensity and execution,” Marshman said. “Overall, we were sloppy, and they were sloppy. You’d expect that at this point of the process.”

Marshman said they are going to keep working on making improvements, and come August, those improvements will be shored up.

“They fell behind by 14 and battled back to tie it up,” he said, adding that he saw a good amount of leadership from the older players.

“That’ll pay dividends down the road,” he said.

Marshman said he saw some good improvement defensively, noting that players were making tackles, which is something the Chiefs struggled with last season. On the offensive side of the ball, Marshman said he thought the boys ran the ball well.

Both coaches had similar thoughts on their teams’ springs.

“It was a great spring, and one of the better springs I’ve had as a coach,” Jackson said. “Right now, we’re at 70 kids. The kids were competitive, and they practiced hard. They were here every day.”

Jackson said it can be hard for the athletes to show up every day because it can be a grind for them internally.

“You’re preparing to see what have,” he said. “We still have a lot of work to do. That’s why the summer is very important. We’re way ahead of where we were when I got here last year. It’s just year two in the program, and we feel good going into the summer.”

Marshman said the players were flying around on the ball, and had high energy during the four-week session.

“This has been one of the best springs that I’ve been around,” he said. “We saw a bunch of kids step up. I felt the kids, even during the last week, had high energy.”

Summer workouts for ECHS begin on May 29, and on June 4 for NHS..

Tiger-Sul in Atmore celebrates plant’s opening Tiger-Sul’s Atmore plant celebrated its grand re-opening on May 15 at its facility on... read more