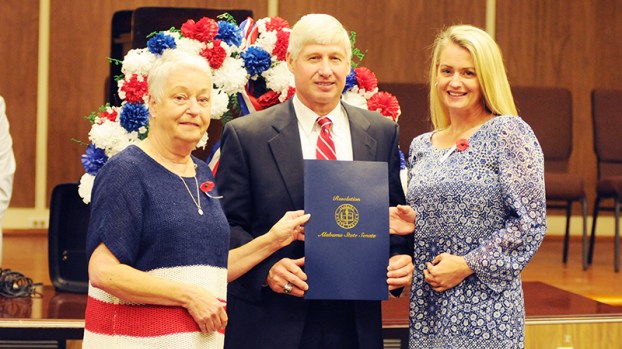 Cpl. Sidney Earnest Manning and Sgt. William W. Seay went above the call of duty for their comrades.

Manning and Seay, of Flomaton and Brewton, respectively, and Congressional Medal of Honor recipients, were recognized for their military service Monday at the Memorial Day Service with joint resolutions naming portions of Highway 31 in their honor.

Both resolutions passed through the Alabama State Senate and House, and have been signed by Gov. Key Ivey. Rep. Alan Baker read the resolutions at the service.

Manning was with the U.S. Army Company G, 167th Infantry, 42nd Division, near Breuvannes, France, on July 28, 1918, took command of his platoon and led 35 men to gain a foothold on the enemy’s position. He received several wounds and held off a large body of the enemy only 50 yards away with his automatic rifle, according to the Military History’s website.

“We’re very proud of Sidney Earnest,” Manning’s great-great niece Lynda Barnes Combs said. “We’re proud of his service. We’re proud that even though he wasn’t technically next in command, that he took it upon himself to lead the charge that day. Out of the 35 that remained, all were killed but seven. Sidney was wounded nine times and still led until he took the foothold and gained the territory.

“He didn’t have to take that lead, but we’re so happy that he did,” she said. “We’re proud that he is in our family.”

Seay was awarded the Medal of Honor while serving as a driver with the 62nd Transportation Co., on a resupply mission. His convoy was ambushed while en route from Long Binh to Tay Ninh in Vietnam. After gaining cover in a shallow ditch, he detected three enemy soldiers who penetrated the position and were preparing to fire on his comrades, according to the Congressional Medal of Honor’s website. Weak from a loss of blood and with his right hand immobilized, Seay stood up and fire his rifle with his left hand, killing all three enemy soldiers and saving the lives of the other men in his location. Seay was mortally wounded by a sniper’s bullet as a result of his action.

Now that portions of Hwy. 31 are being named for Manning and Seay, a GoFundMe page has been set up to help raise funds for the erection of the signs.

Bobby Lanier, the organizer who helped get both resolutions in the legislature, said the cost of both signs is $7,000.

Lanier said those who are interested in donating can visit GoFundMe.com and search for “Medal of Honor Memorial Road Signs.”

Officials: Ceremony will be split into two parts In spite of the inclement weather slated for Friday night, graduation exercises... read more