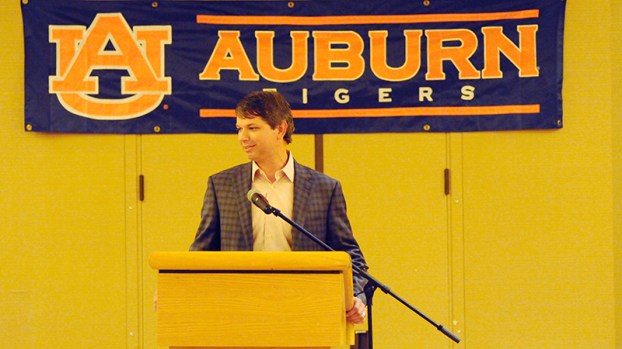 Auburn Director of Basketball Operations Chad Prewett credits his hard work ethic and where he’s from as traits that got him to where he is today.

Prewett, an Atmore native, was the guest speaker at the Escambia County Auburn Club’s annual meeting, which was held on June 14 at Wind Creek Casino and Hotel.

Prewett recalled as a young boy, wanting to be one of two things — a NBA player or a coach. He said he wrote his aspirations on a goal sheet, and had it until he was hired at AU.

Prewett served as a basketball, football, golf and track coach at Escambia Academy from 1995-2004. Then, he had a stint at Faith Academy in Mobile from 2004-07, leading the boys to the 2006 AISA state championship and to the Final Four in 2005. Additionally, Prewett served on the staff at Lee-Scott Academy in 2007 as both the boys and girls basketball, and track coach. He helped lead the LSA boys basketball team to the 2012 AISA state championship, a runner up finish in 2011 and the Final Four in 2009 and 2010, according to the Auburn Tigers’ website.

Prewett said he remembers his time at EA well.

“I was there when we built the current gym,” he said. “We had a lot of pride in building that gym.”

He said as the girls coach, the team worked hard, and added that his work ethic came from living in the Atmore and Escambia County area.

“It’s served me well,” he said about his work ethic.

Prewett said he wanted to instill a mentality on his early teams that they were going to work harder than the other team, all the time.

“We didn’t know what summers were,” he quipped.

All joking aside, Prewett said most important is his faith in God that has guided his journey.

“God has allowed me to stay focused and to achieve my dreams and goals,” he said.

Prewett spoke about the basketball season Auburn had last year. He said the team faced a lot of adversity off of the court.

“We sat down with the team and told them we were going to do one of two things — lay done or come together,” he said. “This year, nobody played harder than we did.”

Prewett said because of the off the court news, two players couldn’t play on the team, but they had other guys step up.

“Yeah, things happened in a negative way for us, but that gave us the opportunity to attack adversity,” he said.

The meeting lasted for three hours before Pearl offered him the job, Prewett said.

Since he’s been at AU, Prewett said he’s used the platform given to him to spread his faith and be there for players.