Sharp of Atmore charged with 3 counts of attempted murder

An Atmore man is in jail on attempted murder charges after allegedly shooting into an occupied vehicle on June 14, according to police officials. 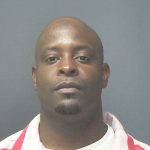 Atmore Police Chief Chuck Brooks said in a release that Labrandon Sharp, of Atmore, turned himself into the Escambia County Sheriff’s Office on June 18, and is facing three counts of attempted murder and shooting into an occupied vehicle.

Brooks said at approximately 5:30 p.m., the APD was called to the 300 block of Montgomery Street in response to a subject discharging a weapon into a vehicle.

“On arrival, officers discovered that shots were actually fired into a vehicle occupied by two adults and a 7-year-old child at the intersection of North Main Street and Liberty Street,” Brooks said. “The occupants were not injured. The victims told officers after the shooting that they fled to a residence on Montgomery Street to get away from the offender, and to notify the police.”

Brooks said the victims identified Sharp as the offender.

Brooks said the APD learned that Sharp fled the scene in a gold-colored Chevrolet Malibu, and minutes later, the suspect vehicle was spotted on South Canoe Road.

“Officers with the Atmore Police Department and Escambia County Sheriff’s Office stopped the vehicle, and identified the driver as Kendra Williams,” he said. “Williams told officers that she had just swapped vehicles with Sharp prior to being stopped.”

Brooks said Williams was taken into custody and charged with assisting Sharp with the attempted murder of the three occupants.