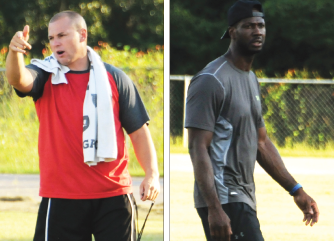 James Smith Jr. and Mike Sims are coaching for the players.

For some time, Sims has been a part of the Alabama Independent School Association, having head coaching stints at Autauga Academy and Crenshaw Christian. He’s been in the AISA for 12 years.

Smith played basketball at Coastal Alabama Community College, then Faulkner State, and went on to play at Colorado State. He graduated in 1998, and then went to Australia to play in the pro basketball league for the Sydney Kings under the National Basketball League banner.

Smith, who went to Century High School, said he’s always been into coaching.

“I’ve always done it while I was playing basketball over there,” he said. “I was coaching a lot of the younger kids. I’ve always enjoyed learning and teaching the sport.”

Sims shares the same thoughts as Smith, but said that when he got older, you realize you want to give back to the community.

“You always want to take pride in what you’re doing,” he said. “Hugh (Fountain) was my old high school coach (at W.S. Neal).”

When asked why each coaches, Smith said it’s a way to impart one’s knowledge and experience on younger athletes.

“A lot of the kids have raw talent,” Smith said. “Helping them gain some of that knowledge helps them along.”

Both being new to the Canoe School is fitting because they’re on the cusp of a new school year.

“Coming into the tail end of them (EA) winning a state championship (2017 AISA Class 2A title over Autauga Academy), you don’t know what they got coming back,” Sims said. “For them, they’ve got to realize that they’re starting off at square one. That’s the mind set they have to have, too. They may be the defending champions, but it’s a new team, new coaches and a whole new era.”

Amanda Crowder’s superpower is teaching. Crowder is starting her third year as a teacher, and her first as a fulltime... read more