Atmore Area YMCA CEO Paul Chason announced his retirement during a board of directors meeting on July 25.

He has been the CEO of the local YMCA for five years as of Sept. 29. 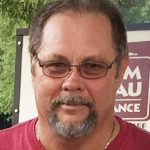 “Denise (Chason’s wife) and I have been kicking this around since November and December of last year,” Chason said. “We finally decided it was time to move on to the next chapter.”

Chason said he still has five months between now and then to help the YMCA during the transition process.

“It also gives time for that person to come on board where we can do a turnover,” he said.

Chason said a big project — the membership software transition — is in the works, and won’t be completed until Oct. 17.

Looking back on his time at the YMCA, Chason said he believes he’s brought eyeballs to the local organization.

Since Chason took over, the YMCA has completed several facelifts of its downstairs gym, hallways and upstairs rooms.

Chason said the fact that the YMCA is still here is a success.

“Within six months of taking the job, the YMCA went into condition three,” he said. “What that means is that we were close from YUSA from pulling our charter and no longer being a Y. That became a priority to solve that problem.

“We’re now a YMCA in good standing with YUSA,” he said. “To me, that was pretty important to solve that issue to allow the community and Y to grow together. I think we have grown together.”

Robert “Robbie” McGhee won a run off election for the vice chairman’s seat for the Tribal Council of the Poarch... read more