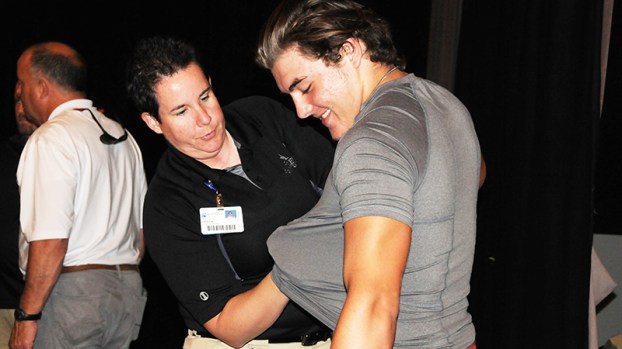 Northview football players were outfitted with EvoShield Game Changing protection gear during a presentation at the school on Aug. 8.

The protection gear was provided by the Taylor Haugen Foundation Youth Equipment for Sports Safety (YESS) program, which address the foundation’s and Haugen’s parents’ strong desire to support awareness of and facilitate the acquisition for youth safety equipment.

Haugen was fatally injured during a collision in a junior varsity football game at Niceville High School (Fla.) on Aug. 29, 2008.

The protection gear is molded to the sides of each football player, and reduces and dissipates impact from contact on the field.

“We found that there’s technology to protect kids from abdomen injuries,” he said. “Deaths are more common than you think.”

Brian said awareness is 90 percent of what the foundation does.

“Funding is a challenge,” he said. “The cost of the gear isn’t as expensive as a pair of cleats.”

“Our goal is to have every player wear this in football,” he said.

To help with the foundation, United Bank donated a foreclosed piece of property that a home was built several years ago. The proceeds from the sale of the house went to the foundation.

“We’re proud to be a part of this,” United Bank President and CEO Bob Jones said. “From us to you, it’s a gift.”

A dedication ceremony was held tonight for the new mural that was painted on the side of the Atmore Area... read more