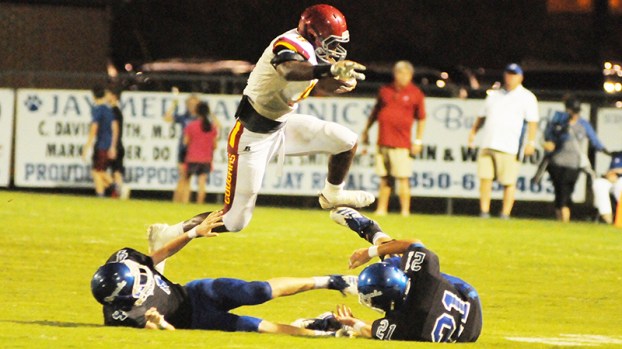 A rivalry continues as Escambia Academy kicks off against Bessemer Academy this week in Canoe to mark the middle of the regular season.

“In the first half, we gave up something like 8 yards,” he said. “Offensively, we self-destructed. In the second half, we scored every time we had the ball.

“It really was a tale of two halves,” he said. “We didn’t catch all of the punts. We just have to be more proficient in all area. A lot of that is our youth.”

During last week’s game, EA was leading 23-20 with 2:23 left in the game, the fifth-ranked Cougars needed a stop on a third-and-seven play. Jay running back James Eddings, the Royals’ go-to guy on offense who played a stellar game, lost the ball and Daughtry McGhee picked up the fumble to turn the tide in the Cougars’ favor.

After a facemask call in EA’s favor, McGhee took the ball 56 yards to Canoe with 56.8 seconds left to put the game out of reach. McGhee finished with 256 yards on 17 carries and three touchdowns, all in the second half.
In the game last week, the Cougars racked up 105 yards in penalties, an issue that is being worked on this week at practice.

Against Bessemer, the Cougars are going up against some standout players, notably wide receiver Tavish King; running backs Justin Jones and Austin Clarke; and quarterback PJ McDonald, to name a few.

Fountain said there isn’t much difference to compare last year’s BA squad to this year.

“Every year, they change a little bit personnel wise,” he said. “They have the same coach, and he’s just like we are. We won’t change much.”

Fountain said the game against BA this week comes at a good time. In years past, this game is played later in the season.

“Last week’s game was a physical game on us,” he said. “It was tough. The game is at a good time for us.”

Fountain added that the team is looking for a big crowd this week.

Kick off in Canoe on Friday is at 7 p.m.

After a slight derailment, Escambia County is back on track as the Blue Devils host Flomaton for homecoming this week.... read more