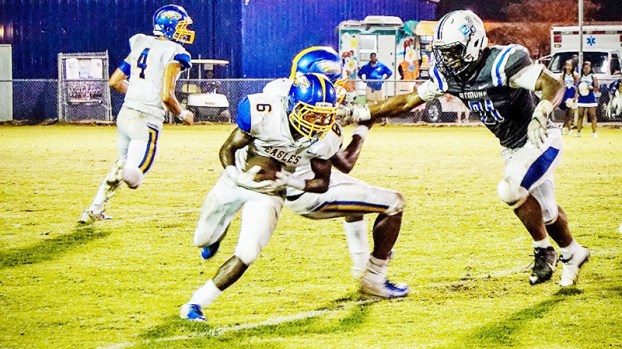 After a slight derailment, Escambia County is back on track as the Blue Devils host Flomaton for homecoming this week.

Flomaton is coming off a 45-6 homecoming victory over St. Michael.

During last week’s win, quarterback Jordaun Patterson was 10-of-16 for 151 yards and a touchdown in the air, and added 46 yards and a score on the ground; Craig Brown rushed for 32 yards on six carries and scored a touchdown; and Malik Brown had five carries for 24 yards.

“I was proud of the kids for the win,” ECHS head football coach Rico Jackson said. “I feel like we’re playing hard. When we compete in every game, we give ourselves a chance to win.”

Jackson added that he feels like they have a good football team, and as the season goes along, more and more people will have the same realization.

Additionally, Lue Williams had five receptions for 59 yards and a touchdown; and

This week’s game will feature Flomaton’s Daquan Johnson and Da’Shun Odom up against a fast swarming defense in ECHS.

“He’s a really good football player,” Jackson said about Johnson. “He’s probably the best quarterback we’ll see so far. They’ve got a good receiver and safety (Odom). They’re well coached. We’re going to have our hands full.”
Jackson said Johnson uses his feet well, and has a good arm, too.

“We’re going to have to come to play and be disciplined, and do our job,” he said.

Jackson said he reminded the players of the importance of winning homecoming. Last season, the Blue Devils lost 40-8 on homecoming to Hillcrest-Evergreen.
“I told the kids that homecoming’s for people coming back home,” he said. “We’ve got to have a great week of practice. We need to understand that our job at homecoming is to win the game.”

A lot of “oohs” and “ahhs” echoed around the newly designed Collaboration STEM Lab at Escambia County Middle School on... read more