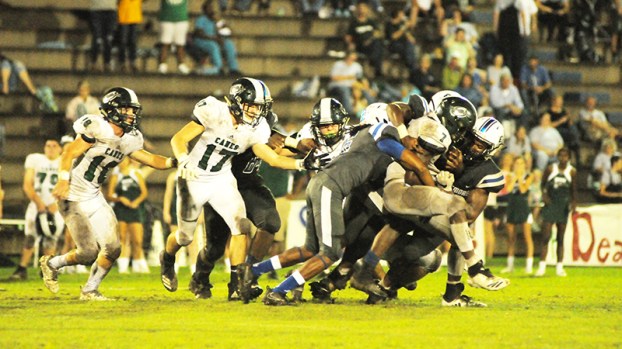 AN IMPORTANT MATCH UP

Escambia County’s trip to Andalusia for an important region contest will all be about business for the Blue Devils.

This week’s game for the Atmore team has playoff implications. At present, ECHS is 3-1 in Class 4A, Region 1. Hillcrest-Evergreen is also 3-1 in the region.

To punch a ticket to the postseason, ECHS will need to win this week’s game.

Last week, ECHS defeated Clarke County 34-12 in a road contest. For the season, the Blue Devils have gone undefeated on the road with wins at Wilcox, Monroe County and in Grove Hill last week.

Jackson said some keys to the game include no turnovers, executing offensively and just to play hard.

Andalusia Jake Wilson will be the Bulldogs’ starting quarterback. Expect Roosevelt Weaver to be in the backfield for AHS.

For the season, Andalusia’s defense has carried the Bulldogs. AHS has given up 119 points so far, compared to Escambia County’s 90.

Jackson said he believes his team can win this week.

“You have to refocus them each week on the task at hand,” he said about taking each game week to week. “You’ve got to look past the last game, and preach going forward.

“We expect our kids to play well,” he said. “It all starts with practice.”

Kick off at Andalusia’s Municipal Stadium on Friday is at 7 p.m.