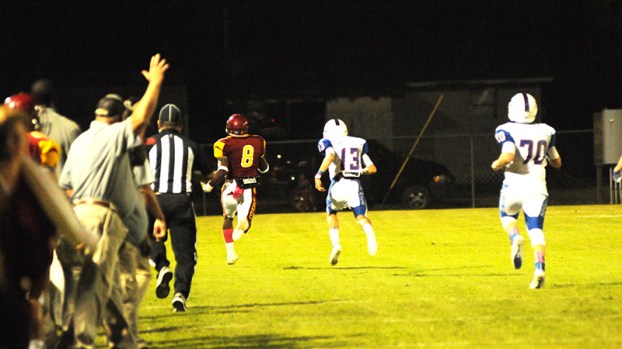 That was the right combination for Escambia Academy’s Pat McGhee as the senior rushed for 211 yards on 18 carries and scored four touchdowns to help lead the Cougars to a 42-20 homecoming victory over South Choctaw tonight at Bachelor Field in Canoe.

McGhee scored on runs of 95, 29, 12 and 16 yards in the victory. His first touchdown gave the Cougars a much-needed 7-6 lead, and one they’d never give up. EA gave up two turnovers in the first minute-and-a-half during the game and SC held a 6-0 lead.

“That was really crazy because we were overlooking them,” he said. “We underestimated them.”

McGhee said soon after the Cougars began focusing, and put together a solid game from then onward.

With the victory the seventh-ranked Cougars advance to 6-2 overall, and 4-0 in AISA Class 2A, Region 2.

EA head football coach Hugh Fountain said he was proud of the way the boys bounced back after a bad start.

“That was the worst start we could’ve ever had, which made it special to bounce back like we did,” Fountain said. “We played one of our better games tonight because we really had to battle. They really battled. I was proud of them for that.”

Before McGhee scored his first touchdown and the Cougars took the lead in the first quarter, the EA defense stepped up big time and dictated the game from then on. The Cougars gave up 141 yards of the Rebels’ offense, according to unofficial stats.

Fountain said he believes the seniors did well, especially on homecoming.

“We said before the game that we really wanted to run the ball,” he said. “They’re a good throwing team. We bounced back, and our offensive line blocked tonight. Patrick and Jabo (Davis) were just men. They ran the ball like men tonight.”

When asked if he thinks he runs faster in cooler weather, McGhee said it seems so.

“It’s the pants,” he said. “Wide pants are perfect.”
Next week, the Cougars host Lowndes Academy.

Southern Pine Electric Cooperative has sent linemen to Hartford to help in restoration efforts after Hurricane Michael made landfall on... read more