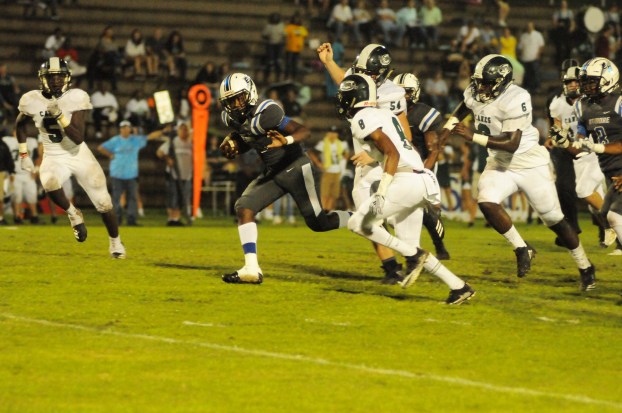 ECHS outscores Bulldogs 16-0 in second half

Escambia County put together some big plays and fought through adversity, defeating Andalusia 24-3 in a road game on Friday.

On the way to Andalusia, a bus broke down that contained the Blue Devils’ shoulder pad equipment. The game was delayed a bit.

“They played their tails off,” Jackson said. “I can’t say how proud I am of them. Even with the truck breaking down and us getting our stuff late, we fought through adversity, and I was proud of that.”

The Blue Devils struck while the iron was hot in the game. Jordaun Patterson hit Jabryce Hooks for a big gain to the Bulldogs’ 1-yard line.

This set up a Patterson 1-yard rushing touchdown, and ECHS led 8-0 with 43 seconds left in the first quarter.

Andalusia’s defense stepped up against the Blue Devils in the second quarter, and Bulldogs quarterback Jake Wilson moved his team into field-goal range from 44 yards out. Reese Burkhardt took honors and laced the ball through the up rights just before the break.

Later in the fourth, Escambia County then used the errant call to its advantage and scored on fourth down to go up 16-3 with 4 minutes left in the game.

In a desperation attempt, Andalusia launched a ball down the field, but Patterson came up with an interception and ran it back for a touchdown to go up 24-3 with just under three minutes to play.

Jackson said they didn’t make any adjustments during halftime, only urging the kids to stay focused on the task at hand.