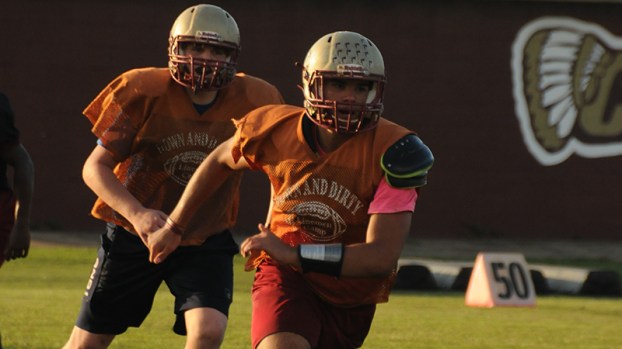 Northview linebacker Lance McLaughlin waits for the right moment and makes his move.

This is the procedure the Chiefs’ leading tackler goes through every time the ball is snapped during a game or at practice. McLaughlin leads Northview in tackles with 107 total this season. He has two interceptions and 10 tackles for a loss.

“Football is my favorite,” he said. “I love the brotherhood. I love coming out here every day, and having the opportunity to hit people.”

McLaughlin moved to the area two years ago from Oklahoma, where he lived for a short time. He lived in Virginia, and got playing time in different states.

“Virginia was different,” he said. “That was just a bigger program. I learned a lot playing there. I love the atmosphere here. It’s not that much different, but it’s smaller.

“I love how close everyone is,” he said. “It’s a good group of brothers, and we come here and ball every day.”

McLaughlin said what led to his success this year is a combination of working hard over the summer and being pushed by his coaches.

“Over the summer, we definitely worked hard,” he said. “Coach (Derek) Marshman pushed as a team. That’s what really helped us this year. I got a lot stronger and faster, and that’s what helped, too.”

McLaughlin said being pushed in the weight room every day was a big key. Additionally, he said going out to run every day was a great way to allow the team to push the limit.

Every week on any given team, each player competes for a starting spot in their respective position.

McLaughlin said he tries to come out every day and give a good look for his teammates, “so they can get better and try and perform on Fridays.”

McLaughlin is the son of Mark and Lacey McLaughlin of Molino, Fla., and Chontelle of Oklahoma.

Escambia Academy is facing a dangerous Fort Dale team this week as the Cougars end their regular-season run in Greenville.... read more