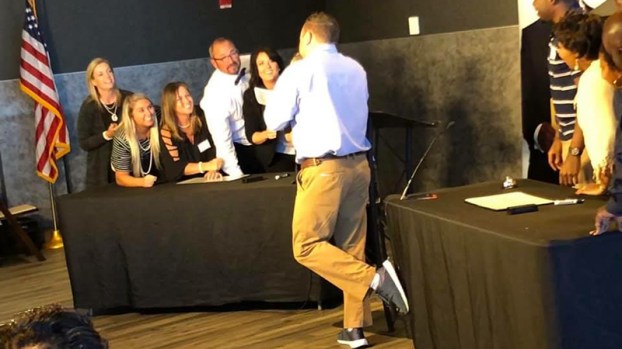 Those are a few words that describe the White Family, who recently auditioned for a spot to compete on “Family Feud.”

“Family Feud” is an American TV game show created by Mark Goodson, where two families compete to name popular responses to survey questions to win cash and prizes. At present, Steve Harvey is the host.

“We played a mock game, and then we were sent to another round there,” Lauren Nall said.

Nall said the second round included an interview.

“We just told about our family and did some interviewing,” she said.

From there, Nall said their audition tape was sent in to the game’s headquarters, and the family would receive a postcard in about a month, letting them know they went into the show’s active file.

“We received the post card last week,” she said.

Nall said they are waiting on an email with travel arrangements for the next step. The next step includes a trip to Los Angeles, Calif., she added.

“They said it would be up to a year,” she said. “Even if we go out there, we have to compete.”

Nall said it’s not guaranteed that they are going to be aired on the show, adding that they’re still trying out.

Nall said they decided to audition for the show because they’re “loud and fun.”

“We were like, ‘we can do this,’” she said. “’We’re going to California.’ We knew we had what it took. We are entertaining.”

Nall said through the years, the family has watched the show.

“When we knew we were going to go on the show, we got together and had practices at Tracey’s house,” she said.