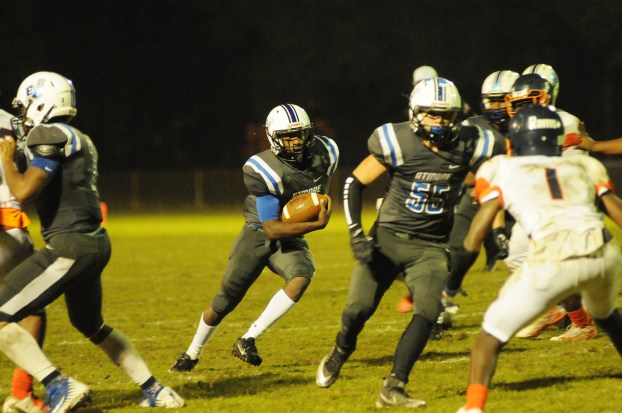 For the first time since 2010, Escambia County ended its season with a winning record on Nov. 1.

The Blue Devils defeated Francis Marion 14-0 at home on senior night in a tough game.

“It’s always good to end on a win,” ECHS head football coach Rico Jackson said. “We played sloppy (in the first half). I know the kids were uh… it was a tough game. Knowing the situation that was kind of hanging in the balance.

The situation Jackson was referring to centered on getting a playoff berth. Because ECHS lost 7-2 to Class 4A, Region 1 opponent Williamson a week ago, its playoff destiny was out of its hands.

The Blue Devils needed LeFlore to beat Selma, which didn’t happen as SHS won 38-8. Now, ECHS’s hopes in getting in the playoffs fell to Williamson, who had to beat Vigor. However, Vigor won 13-0.

The game was scoreless until the midway point of the second quarter.

ECHS senior quarterback Jordaun Patterson found senior receiver Lue Williams for a 38-yard touchdown pass with 6:15 left in the first half after the Blue Devils recovered a fumble. The score remained 6-0 until about 6:20 left in the third as senior running back Demetrion Barnes scooted in from 3 yards out. Dimitri Wiggins, a senior running back, converted the 2-point conversion.

Jackson said the boys have put in a lot of effort this year.

“They’ve accomplished a whole bunch,” he said. “I can’t be more proud of them.”

Getting the job done

EA set to face Edgewood Academy in the AISA 2A semifinals Getting the job done. That’s what Escambia Academy is... read more