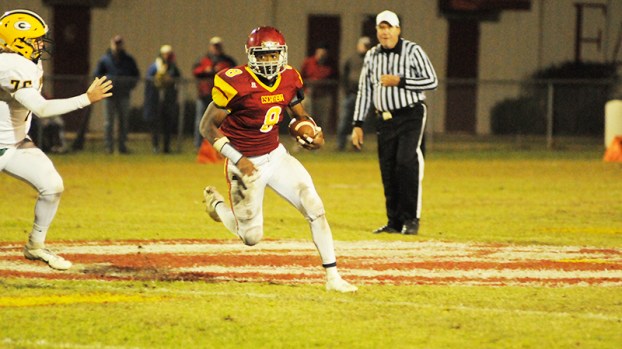 The senior running back put up a monstrous 397 rushing yards on 37 carries and scored six touchdowns to help lead the Cougars to a 39-31 victory over Edgewood Academy in the AISA Class 2A state semifinals in Canoe.

Always humble, McGhee said this game was emotional for him because he played Edgewood (a 33-21 loss in 2015) for his first varsity game.

“The first time we played them, they beat us,” he said. “This game was pretty emotional.”

“It feels pretty good,” McGhee said about making it back to the championship game.

EA led 12-0 at halftime, but Edgewood took advantage of a couple turnovers and an onside kick recovery to score three touchdowns in the third quarter. The Cougars led 26-19 going into the fourth quarter.

“It was a game in which for a minute you think it’s over, and then they battle back,” he said. “Give them credit, they had a good game, and they played hard. We just had a lot of mistakes, and a lot of penalties that killed us. We let them out of the hole.”

McGhee’s scoring drives include an 18-yard dash with 9:45 left in the first quarter; a 5-yard run with 9:48 left in the second; 39-yard and 61-yard punches in the third to help EA keep its lead intact; and two fourth-quarter TDs for insurance.

Fountain said penalties and turnovers cost EA in the third, however, offensively, he was pleased with how the boys just pounded the ball.

“We fought for another day,” he said. “When you have a team at this point, you keep fighting and plowing. We’re going to go and defend that crown. It doesn’t get old at all. This has nothing to do with last year. Tonight, we kind of played with what we’re good at.”

Fountain said making it back to the state championship game is always a great honor.

“It’s strong, and pretty strong for this group of kids,” he said. “I’m proud of them for making it back. Making it one time it’s a great honor, and making it two or three or four, it’s an even greater honor.”

The Poarch Warriors beat Brewton 39-0 on Nov. 3 to win the juniors Escambia River Conference Championship. The game was... read more