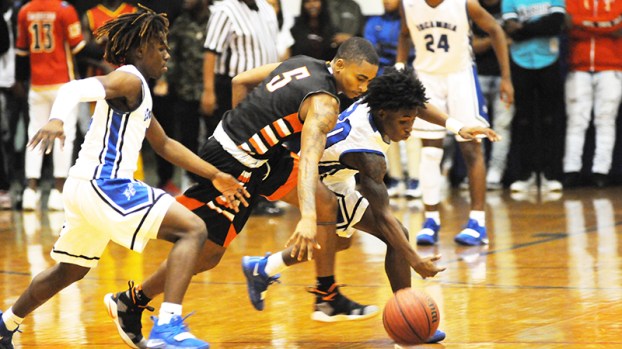 Allen Patterson, who had two 3-pointers in the first period, chipped in with 12 points and five assists for ECHS. Malik Brown had eight points, and Demetrion Barnes had nine points. Trevonn Lambert had eight rebounds and four blocks.

Jackson said there’s much to improve on. During the game, BCHS took the Blue Devils’ baseline game out in the third period.

Late in the game, ECHS transitioned to a 2-1-2 defensive press for a counter.

Jacala Nixon led ECHS with 18 points, and C’Anna Betts chipped in with 15.

Tiquale Taylor led the Cougars with 28 points; Tyrese Smith and James Williams chipped in with 8 points each.

EA basketball coach James Smith said he’s still trying to figure out his starting five. During the game, the Cougars switched a couple of groups.

“Like tonight, the best compliment I got was when a referee came to me and said ‘You’ve done a great job with the kids. They are so disciplined.’

“They’re trying to buy in to what we’re coaching them,” he said.

An Atmore angler is competing in the 2019 Fishing League Worldwide (FLW) tour season, according to officials. Bradley Dortch will... read more