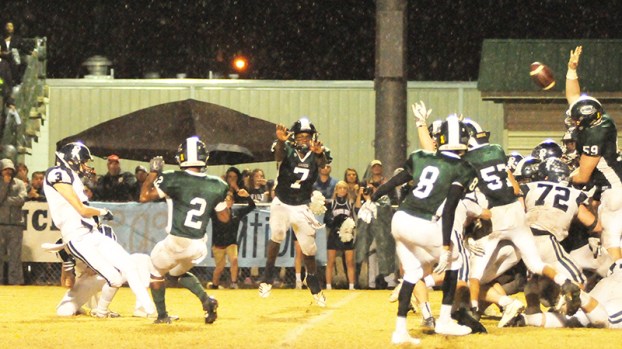 Hurricane season has been extended in Flomaton.

Before the block, the Eagles drove the field to around the 12-yard line, and took a timeout with 2.5 seconds left in the game to set up the try.

Flomaton’s Jackson Dullard managed to get his extended right arm on the ball for the win.

Before every game, FHS head football coach Doug Vickery wrote a short prayer asking God that the Hurricanes would win.

“He stood behind us,” Vickery said.

With the victory, the Hurricanes (11-3) advance to play Piedmont (12-2) in the state championship at Jordan-Hare Stadium in Auburn on Dec. 6 at 11 a.m. for the first time in school history. FHS already made history Friday night with its semifinal appearance.

What would end up being the game winner was a 2-point conversion after Daquan Johnson connected with Da’Shun Odom on a 84-yard touchdown pass with 5:30 left in the ball game. Johnson found Chance James on a short pass for the conversion.

The final touchdown for the Hurricanes ended a second-half that saw FHS outscoring Providence Christian 20-7. PCS led 26-14 at halftime.

From the start of the third quarter, FHS started getting its momentum back as Odom scored on a 34-yard rush, and Johnson added a 65-yard touchdown run late in the third quarter to tie the game at 26-all.

The game was tied going into the fourth quarter, where FHS stopped the Eagles’ next possession. After getting a stop on the Hurricanes’ next drive, the Eagles converted on a 1-yard touchdown run from Isaac Gordon with 6:01 to go.

Most of the Hurricane’s touchdowns came on big plays and in big situations.

Odom’s 84-yard touchdown game winner came on third down and long, and with 5:30 left in the contest.

Earlier in the game, PCS took its 12-point lead after a 20-yard field goal from Warren at the end of the first half after a Johnson fumble.

Flomaton got on board in the game when Johnson found Quincie McCall for a 80-yard touchdown pass with 6:24 left in the first quarter.

Escambia County’s Lue Williams scored 32 points and brought down 14 rebounds to help lead the Blue Devils to a... read more