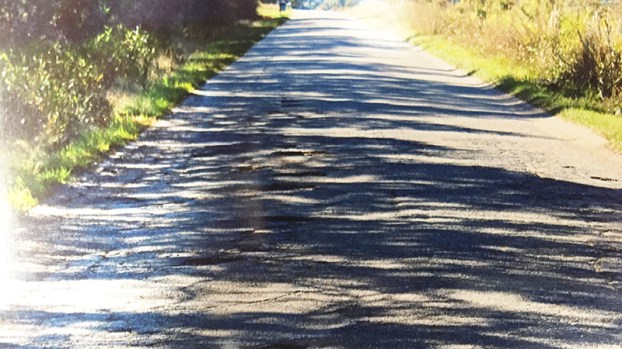 Shown is a stretch of Ewing Farm Road. | Submitted photo

Residents of Ewing Farm Road submitted a petition, urging the Escambia County Commission to fix their road because potholes are tearing up vehicles.

Edward Adams Sr., a resident on the road, said the 50 residents who signed the petition just want something done.

Adams said on the petition that repeated requests have been filed with the commission.

“We’ve been asking for years for repairs on the road, but all we get are excuses,” he said  “Every time we ask, we are given a different excuse so we are asking the board chairman and county engineer for help.”

Adams, who grew up on Ewing Farm Road, said other than the potholes, the road is broken where the curving crosses under the road. He said when it rains water comes across the road.

“We’ve got to do something,” he said.

Commissioner Brandon Smith said the commission has already got the road on the list to be repaired.

Smith said that he’s talked with several residents who live on the road, and the commission is looking at repairing the worst part of the paved section, a 1.1 to 1.2-tenths of a mile portion.

Smith said a lot of the work on the road also entails some pipe replacement.

“Over the ditches, it’s filled in so bad that water doesn’t have anywhere to go,” he said. “We’ve got to go in there and replace a lot of pipe and pull a lot of ditches. We have that in the works now.”

Smith said he doesn’t know when the road is going to be fixed now as the ground is too saturated after recent rains.

“The main thing right now is letting the water out of there,” he said. “We want it done right when we do it. If it would dry out on us, that would be big help for us.”

Smith said he understands the residents’ concern, and it’s a priority that they are able to drive on a road that’s in good condition.

“I want to do something to make it better for them right now until we can do the whole thing,” he said.

Your favorite superheroes will be out in force on Dec. 8 as the Atmore Fire Department is holding a second... read more