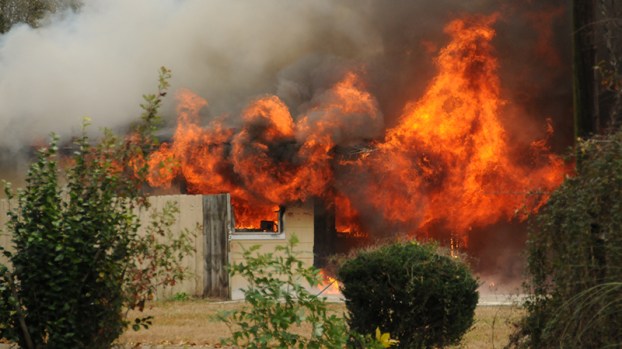 A fire destroyed an Atmore home on Dec. 21, according to officials.

Atmore Fire Chief Ronald Peebles said firefighters were called to 107 Cloverdale Rd., at approximately 11:15 a.m. for the fire, which was fully engulfed.

Because of the nature of the fire, Peebles said firefighters enabled an interior attack from the back side of the house, which was deemed a total loss.

“The reason we did that is because we didn’t want to push the fire to the back of the house,” he said.

Peebles said because the homeowner had some 100 rounds of ammo, he heard around 10 go off during the fire.
“They had some guns in there,” he said. “Obviously all of them (bullets) didn’t go off.”
Peebles said when bullets aren’t loaded in a gun and go off, they explode from the side and form shrapnel.

Peebles said the cause of the fire was due to an unaccompanied space heater left on top of a drawer, and added that the home owner’s daughter was inside and got out in time.

Peebles said the American Red Cross was dispatched to the scene to lend aid.

It was the best surprise ever for Rachel Patterson First Grader Kaleigh Stallworth. While distracted for a picture, Kaleigh’s mom,... read more