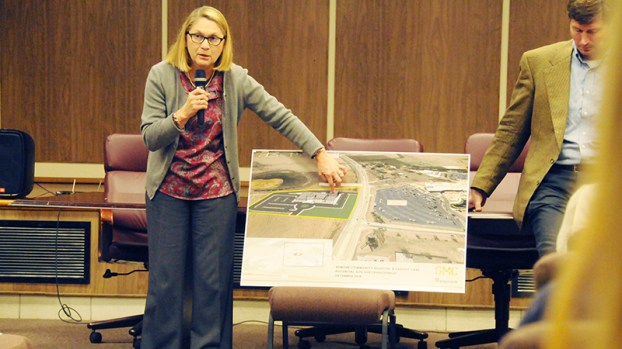 A small portion of the Atmore community came with questions and concerns during a public hearing for the location of the proposed new hospital to be built at the Rivercane Industrial Park on Dec. 18.

The public hearing was held about a month-and-a-half after the Atmore City Council took no action on voting to donate 10 acres at Rivercane for the construction of the hospital, and two months after a workshop was held by the Escambia County Healthcare Authority and Atmore Community Hospital board to discuss the donation.

As recently as Nov. 29, the ECHA and ACH boards announced that plans to build a new hospital for the city are moving forward after a feasibility study recommended taking the action based on the age and condition of ACH.

Will Ruzic, executive director of Coastal Gateway Regional Economic Development Alliance, served as the moderator of the public hearing.

“Obviously, one of it not the most important aspect of the community is healthcare,” Ruzic said to open the hearing. “That’s what we’re here tonight to discuss.

“We all understand the challenges rural areas face in healthcare,” he said. “Kudos to Atmore and Escambia County for realizing this issue years ago, and figuring out ways to address that. That’s what this is about, the people of Atmore making the best decisions so they can tackle the issue head on, not for today, but to ensure the longevity of healthcare here.”

ECHA Chairman Nancy Lowrey, who serves on the ECHA board and is chairwoman of the ACH board, spoke for both boards during the hearing.

On whether or not the new hospital is proposed to have two operating rooms, Lowrey said there will be two rooms.

“This has been a project we’ve been working on for quite a few years,” she said. “The model they built is based on the market study for the usage and what the community supports. There are two operating rooms in that model. The thought is to have one operating room completed, and one shelled out as needed.”

One of the main questions was how many employees will be employed at the new hospital, once it opens.

Current ACH Administrator Doug Tanner, who was at the hearing, said at present, the hospital has close to 200 employees.

Lowrey said the boards don’t know that any additional staff the hospital will retain.

“The future staff will be based on whatever services the hospital will provide,” she said. “We’ll have more technology, and we’ll be able to do more high-tech services.”

A concern the public had about the building of the new hospital is how it’s going to be financed.

The ECHA, at present, owns ACH and D.W. McMillan Memorial Hospital in Brewton.

Lowrey was asked why a new hospital is being built when the current one could be renovated. She said that while D.W. McMillan was renovated, new portions were built around the facility, after the hearing.

“We’re not putting $32 million into building it,” she said in response to a question. “We’re having to finance it. The facility that we have now (ACH) has aged to a point where we can’t improve it anymore. It’s not just the construction side of it; it’s the state guidelines. It’s just cost prohibitive.

Ruzic later explained what was sited as a new market tax credit.

Added Lowrey: “The reason this particular site has been identified as one is the new market tax credit. This area does qualify as a new market tax credit site, which is very important in getting the loan that’s going to be needed to build the hospital. There is an opportunity to provide services we can’t provide, and if we add those services, and have more visibility in the area, it attracts more patients, and attracts more and retains doctors.”

On whether or not the current doctors at ACH will move with the new hospital, Lowrey said those who are contracted with the hospital will move. A lot of the doctors who work around the hospital aren’t employed at ACH.

Another concern was the travel time to the new proposed hospital.

“The ambulance service would be the same as I hope we have now,” Lowrey said. “As far as transportation, that’s something we’ve talked about and looked at. The services we have now include the ECATS service and other programs, like Wheels of Wellness.

ACH, formerly known as Vaughn Hospital, was built in 1946 on North Main Street, utilizing Hill-Burton Act funds. Additionally, ACH was formerly known as Greenlawn Hospital, and moved to its current location on Medical Park Drive in 1967, and affiliated with Infirmary Health in 2015. The current hospital has far more inpatient bed capacity than the proposed new facility – 49 total, compared to the 27 beds proposed – but has only three emergency room beds, which has led to long wait times for Atmore residents and is one of the most common complaints raised about the current hospital.

A comment was made as to whether there was any backlash from donating the 23 acres at Rivercane for the construction of Brown Precision.

Mayor Jim Staff said there was none.

However, the land that was donated was for industrial development.

“The property we’re talking about now is retail property,” City Councilman Chris Harrison said after the hearing. “The benefit to donate the industrial property was greater because we were informed that it would bring along better businesses to support Brown, and also that it got us started in the industrial sector.”

Harrison said he isn’t alone in the fact that councilmembers have been contacted by citizens saying they don’t want the hospital to move.

It was the best surprise ever for Rachel Patterson First Grader Kaleigh Stallworth. While distracted for a picture, Kaleigh’s mom,... read more