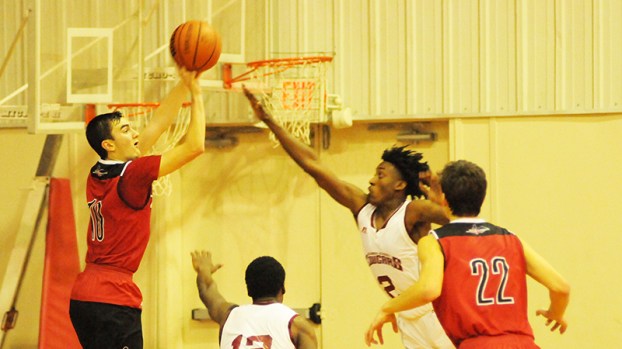 A tale of four periods played out for Escambia Academy as the Cougars topped West Florida Baptist Academy 50-46 in the semifinals of their New Years Classic on Jan. 4.

Slow starts and low scoring dictated the first period, turnovers for EA were prevalent in the second as WFBA led 25-24 at the break, and big runs by EA and WFBA in the third and fourth periods highlighted play on the hardwood.

“It’s always like that after the break,” EA coach James Smith said after the Cougars went on a 13-0 run to start the third period. “That’s the one thing you kind of dread, coming off halftime. It’s all about understanding how to control the momentum and tempo. If you don’t have something going in the first half, you just erase it and move on.”

Smith said the Cougars did well in playing defense during the third period.

“Our man defense is getting so much better now because they’re learning the principles we are teaching them,” he said, adding that the key is to not “hug” the opponent. “(Man to man defense) will deter West Florida from doing what they do.”

With the victory, EA advances to face Success Unlimited tomorrow at 3 p.m. in the tournament championship for the boys. EA’s girls fell 48-20 to WFBA, and will play at 11 a.m. in the consolation game.

In the third period, the Cougars got off to a quick start, and Bryant Quimby got a field goal to put the Canoe School ahead 28-25.

Leading 42-32 going into the fourth period, Smith said he had to sit a couple guys because they were in foul trouble, and also for rest.

WFBA cut the game to six with a strong full-court defense and drives to the basket. The Conquerors tied the game up on a drive to the basket, and Matt Harold found Andrew White on a pass to take the lead at 44-42 with 3:23 left in the game.

Jayson Helton, about a minute later, got an old fashioned three-point play for a 47-46 lead and the Cougars bowed up on defense after WFBA tried to tie the game with less than 10 seconds to go.

Smith said he knew that WFBA was going to come back, but in the end, it gave the Cougars some experience, especially the younger players who filled in for the starters.

In the girls game, LaKrystal Turner and Julie Conway led with 5 points each; and Mary Thompson Lancaster had 4.

From the first moment Scott Mason laid eyes on the talent at Escambia County, he knew he wanted to be... read more