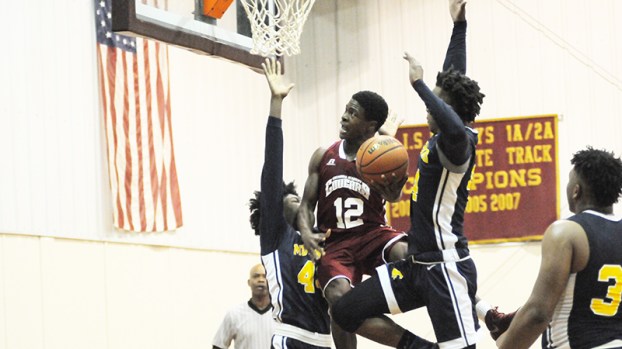 Clarification: In this online article, a player was misidentified in Escambia Academy basketball coach James Smith’s comments. We have removed the player’s name, and were happy to help set the record straight.

Turnovers plagued Escambia Academy as the Cougars fell 63-33 to Success Unlimited in the championship of their New Years Classic today in Canoe.

The Cougars (9-4) hung tough with the Mustangs in the first period, going on a 10-0 run after falling behind by eight. EA kept the game manageable in the second period, but trailed 36-23 at the break.

In the third period, SU put together a good defensive game plan, forcing turnovers and converting on transition to pull away for good. SU led 59-29 going into the fourth.

“Turnovers killed us again,” EA coach James Smith said. “Exactly what we didn’t have many of the first game, we had four times as many the second game. We didn’t take care of the ball, and that’s where most of our turnovers came from. This will be a learning lesson for them. It’s still early in the season, and our main goal is to make it to state and win state.”

Taylor led EA with 21 points, and went 8-of-8 from the free-throw line.

In girls action, the Lady Cougars topped Central Christian 38-36 in the consolation game to finish third.

WFBA defeated PCA to win the tournament in the girls bracket.

A tale of four periods played out for Escambia Academy as the Cougars topped West Florida Baptist Academy 50-46 in... read more