Eric Coale has been appointed as the Escambia County District Judge by Governor Kay Ivey. 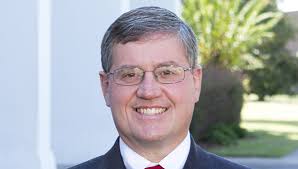 Judge Bert Rice announced earlier this year in January that he would not be seeking re-election as Circuit Court Judge.

Judge Jeff White ran for Rice’s position and was elected and that left open the position for District Judge.

“When the position opened, I presented my resume. I was interviewed for the position and received an e-mail form the Governor’s Office offering me the position (recently),” Coale said.

“I have always devoted myself to working with young people and families and this position will offer me to continue that work. The entire country is facing a drug epidemic and that leads to family troubles. Those are the areas that need the most focus on,” Coale said.

Judge Rice has setup various programs during his seat in office to help battle drug problems and Coale wishes to continue those programs and seek funding for other programs to aid.

Coale is a republican, member of First Baptist Church of Brewton, a graduate of T.R. Miller High School and the University of Alabama where he earned a degree in finance.