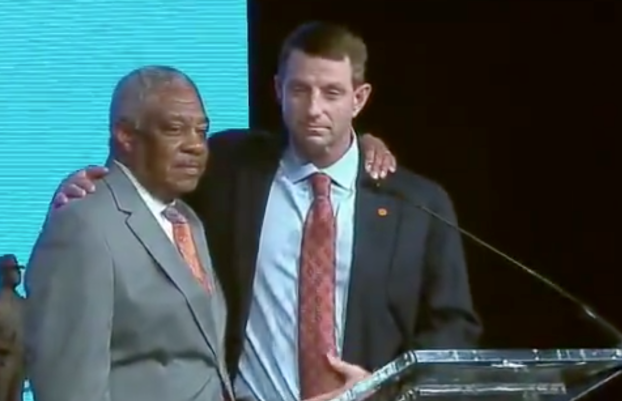 Days removed from winning his second College Football Playoff National Championship, Swinney invited McCorvey up on stage to show the world what the game of football does. Clemson defeated Alabama 44-16 on Jan. 7.

“This is how God works through the game of football,” Swinney said via a FOX Sports broadcast. “Highway 31, which runs all the way through Alabama — he’s from Atmore, Alabama, and I’m from Pelham. Highway 31 was the only highway I knew.

“You take the game of football, and it brought a guy from Atmore together with a young guy from Pelham,” he said.

Swinney was referring to his time as a wide receiver for the University of Alabama under former head coach Gene Stallings. McCorvey served as Swinney’s position coach.

“I played for him for three years,” Swinney said. “He (McCorvey) was very instrumental of me getting into coaching.”
Swinney, who served as a graduate assistant at UA for a short time, said he found himself on McCorvey’s staff as a receivers coach in 1996.

Swinney said he told McCorvey that he didn’t want him to coach, but to teach about life and help run the program.

At present, McCorvey is the associate athletic director for football administration.

“Even though that’s my name on this trophy, his name aught to be on there, too,” Swinney said.

Clarification: In this online article, a player was misidentified in Escambia Academy basketball coach James Smith’s comments. We have removed... read more