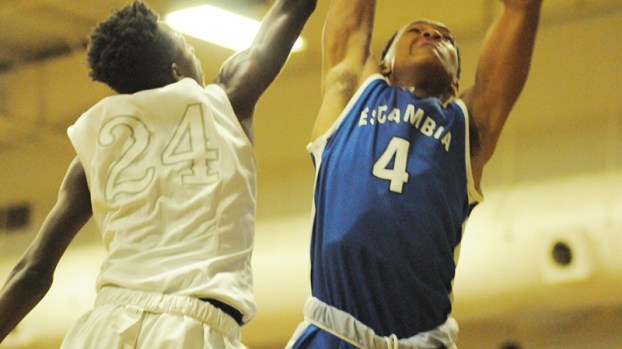 Escambia County went on a 15-0 run early in the first half, and pulled away in the third period as the Blue Devils topped Baldwin County 69-54 in regular season action tonight in Bay Minette.

The Blue Devils entered the game after defeating Class 4A No. 2 Williamson 57-54 on a game-winning 3-pointer by Demetrion Barnes.

At Class 6A BCHS, ECHS traded buckets early, but began its run when Malik Brown attacked the basket for an easy bucket. Lue Williams, who led with 29 points, followed that up a short time later with a 3 to give the Blue Devils the lead at 8-7, and one they’d never give up the rest of the game.

Allen Patterson hit a 3-pointer, Williams made two free shots, Jordaun Patterson drained the latter-half of a pair and Barnes hit a 3 to complete the run.

Baldwin County began to climb its way back later in the first when Keyon Palmer got a basket, and James Stanley got a tre to cut the game to five. D. Sewell followed that up with a turnaround lay up to make it 19-16, ECHS.

The Blue Devils led 20-16 going into the second period, where Williams sparked the Atmore team.

“The first and second quarters, things didn’t go my way,” Jackson said. “We stayed humble and resilient in the third quarter. We did a good job of stretching the lead out.”

Williams continued his dominant play with good inside work in the third period as ECHS led 54-43 going into the fourth.

Peoples added a 3-pointer to start the fourth, and Brown put in a rebound and put back to make it 59-45.

Williams added a late dunk in the fourth.

With this win, ECHS improves to 14-4 overall, and hosts W.S. Neal on Monday at home in area play.