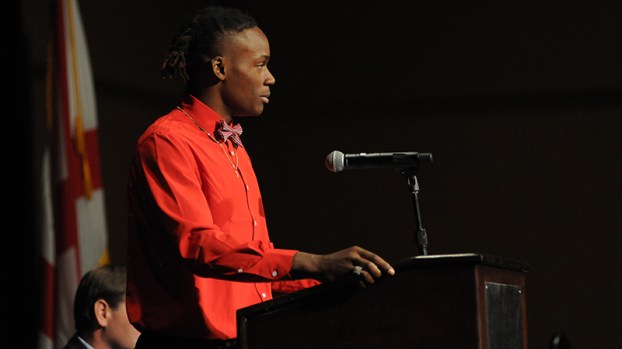 Canes’ Johnson named back of year

MONTGOMERY — Flomaton’s Daquan Johnson was named the Class 3A Back of the Year at the 2018 Alabama Sports Writers Association Mr. Football Awards Banquet, which was held on Tuesday and presented by the Alabama High School Athletic Directors and Coaches Association.

Johnson rushed for 2,411 yards on 304 carries and scored 30 touchdowns on the ground, and threw for 1,965 yards and 23 touchdowns in the air during the Hurricanes’ state championship campaign last fall.

“It was a very nice honor,” Johnson said about receiving the award. “I just want to thank my coaches, teammates, the Alabama Sports Writers Association for believing in me and giving me this recognition. I’m glad to have it.”

Johnson credited his teammates for much of his success this season.

“They pushed me in practice every day,” he said. “If I had a bad pass, they picked me right back up and encouraged me to keep going, and striving to be the best player.”

Johnson was one of three finalists for back of the year. Tony Amerson of St. James and Ian Thies of Westminster Christian were the other finalists

All finalists and back of the year candidates, including Mr. Football, were selected by the ASWA.

T.R. Miller’s Ricky Samuel was a finalists for lineman of the year, but Ja’Len Sims of Fultondale won the honor.

Mr. Football and the state’s other major high school football award winners were named at a luncheon banquet sponsored by the AHSADC. It was held at the Renaissance Montgomery Hotel & Spa at the Convention Center.

Nix threw for 3,496 yards and 48 touchdowns, plus ran for six scores, to lead the Indians to their second straight Class 6A championship and a 13-1 record.

Escambia County went on a 15-0 run early in the first half, and pulled away in the third period as... read more