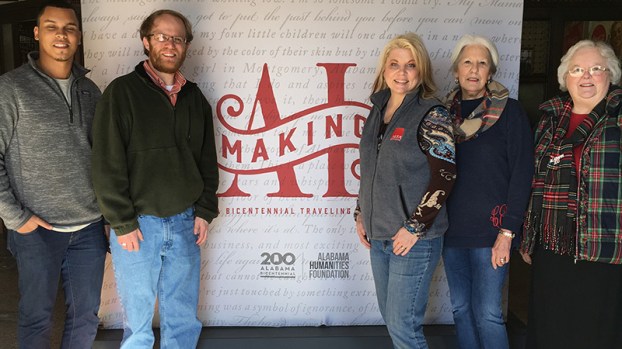 Group trains for 200 exhibit in Selma

Members of the Escambia County 200 Alabama Bicentennial joined other committees from 15 counties in the state Jan. 10 for a Making Alabama a Bicentennial Travel Exhibit training session at the Old Depot Museum in Selma.

The Alabama Humanities Foundation sponsored the session, which included each committee getting a feel of how to assemble the traveling exhibit. The AHF supports public programming that promotes the understanding of history, literature, philosophy, civics and culture throughout the state. The AHF is an independent nonprofit and partner of the National Endowment for the Humanities.

The exhibit complements with artistic panels depicting periods of Alabama’s history plus the people who played prominent roles in that history.

Additionally, the exhibit showcases decisions and turning points that shaped the state’s history, culture and geography through displays and teaching resources.

Since March 2018, the exhibit has crisscrossed through the state and will end in November 2019. Escambia County’s exhibit will be held in May. Each county hosts the exhibit for a three-week engagement.

The session was held in Selma to allow for Dallas County to set up its exhibit for the celebration.

“We want you to make this your exhibit,” AHF Executive Director Armand DeKeyser said at the training session. “This is an exhibit of the history of Alabama. Each community can highlight their county.”

At the exhibit, visitors will be able to learn about eight major time periods of Alabama with interactive display screens, among others including a section that details important figures throughout the state’s history.