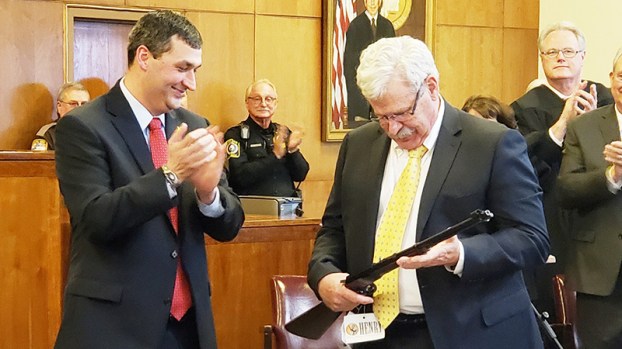 Passing of the rifle

After 16 years as sheriff of Escambia County, Grover Smith has officially ended his tour of duty.

Heath Jackson, who was elected to the sheriff’s post last November, replaced Smith.

Smith served four terms as the sheriff and in March, he’ll mark some 46 years in law enforcement. He began his tour in law enforcement at the Flomaton Police Department in 1973. Later on, he went to work in East Brewton. Some time later, he went over to the city of Brewton for 22 years, the last 12 of which he served as police chief.

Smith worked for Mike Godwin for three years, and then made his run for sheriff.

When asked if he’s retiring, Smith said he plans on doing some part time work with the district attorney.

“I’ve got a couple little things going,” Smith said. “I’ll be working with the district attorney on a part time basis helping his office get ready to go to trial, hopefully be able to facilitate major cases they got sitting there, reviewing them and so forth.

On his thoughts overall serving as sheriff, Smith said he couldn’t have asked for a better county commission.

“I’ve had the opportunity to go across the state to other counties and see how other county commissions in counties go through,” he said. “Through no skill on my part, I’ve picked the best one to be sheriff at. We’ve had a great relationship with the commission.

Over the 16 years as sheriff, Smith said the biggest change he’s seen is the jail overcrowding issue.

At present, he said there are more than 300 inmates housed in the jail, which has a capacity of more than 120.

“For possession of drugs, you can’t get in prison for that,” he said. “Stealing and drugs are the number one crimes. It makes it hard for law enforcement when we’re getting the same person over and over. Whether it’s by design or not, the legislature has transferred the burden of these persons to the county jails. It can be taxing on our resources or local law enforcement.”

Smith added that technology has been a big change for the ECSO as each deputy now carries a computer in their cars so that they can transmit reports to the central server in Brewton.

Speaking of changes, Smith said the drug epidemic evolved during his time as sheriff.

While methamphetamine has been big in the county over the years, the prescription drug epidemic has taken over and is showing no signs of slowing down, he said.

“When I first started working drugs as an investigator for the city of Brewton, I could’ve written down 15 names, arrest them and put them in jail, and it would’ve made a huge impact in Escambia County,” he said. “Now, I can write 50 names and go arrest them and I doubt you can see a difference.”

Smith said the question now is does the county increase manpower to try and eliminate the epidemic, or should law enforcement spend the time going after the drugs that kill people?

“Drugs dominate everything to do with law enforcement,” he said.

During his time as an investigator with the city of Brewton, Smith said there are two cases that stand out to him.

“The two biggest ones are Stephanie Reed King, a 16-year-old girl who was abducted from church on a Saturday morning, and raped and murdered,” he said. “Over two months later, we finally made an arrest, which led to a successful conviction and he is in prison.”

Smith said the case of Melinda McGhee, an Atmore who has been missing for almost 17 years, is still fresh on his mind.

“I think of that case every day,” he said. “I hate to go home with it unsolved. The best thing we did was hiring (Lead Investigator) Tommy Calhoun, who was over the city of Mobile police department criminal division. He is an expert in cold cases, been working on cold cases for 40 years and will continue to work on it under Sheriff Jackson.”

Smith is married to Patsy; has two children, Wendy Shue and Renee McInnish; and one granddaughter, Emily Ann Nixon.

City vote was 3-2 The Atmore City Council tabled a resolution at its Jan. 14 meeting to donate 10 acres... read more