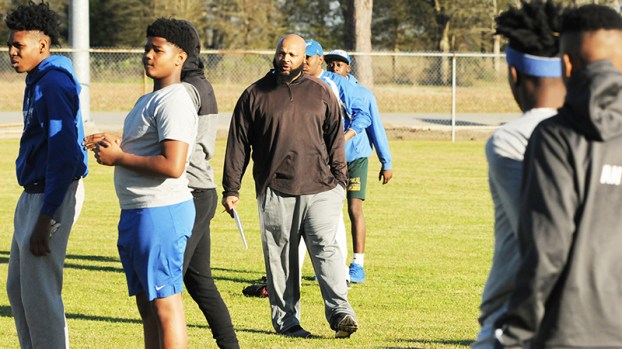 Kasuan Bullard walks around surveying his newest crop of tryouts on a recent cool and breezy Monday afternoon.

The Escambia County baseball coach and defensive coordinator was officially hired as the Blue Devils’ newest coach Jan. 24 during the county schools’ board of education meeting. He will be teaching health and driver’s education at ECHS.

For the past 12 years, Bullard has taught and coached at Williamson High School.

He spent the last 10 years as the baseball coach at WHS.

Bullard said a big goal of his was to try and build a program at the Mobile school.

“I think that’s something I’ve had some success at,” Bullard said. “We’ve had some years that were better than others.”

“He (Mason) said he heard a lot of good things about me,” Bullard said. “He wanted to bring me up and talk with me, and see what I think about the job.”

The Mobile native said after some conversations and meeting Mason, he was offered the job.

“He offered me the head baseball job and the defensive coordinator job,” Bullard said.

Bullard said after thinking the offer over, talking it over with his wife, Giovaunna, and talking with some mentors of his, he thought it was a good opportunity to show what he’s got to offer.

And it was those few mentors that really galvanized his calling to become a coach.

“Growing up in a single-parent home, some of the first influential male role models in my life were coaches,” he said. “I played ball starting at the age of 7. Baseball was my first sport. I played football and basketball, too. I just saw the impact they had on me, and wanted to pass it on.”

Bullard said his coaching philosophy is grounded on hard work and having fun.

Bullard and his wife, Giovauna, have two children, Kasuan and Giana.