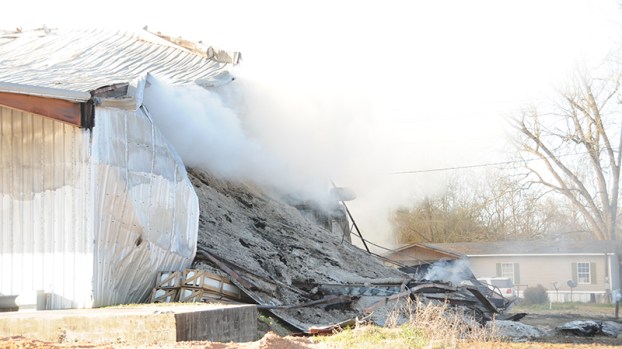 Shown is the back side of the cotton seed house. | Andrew Garner/Atmore Advance

A fire destroyed a cotton seed house at the Frank Currie Gin Co. in McCullough Thursday afternoon, according to officials.

Kirby said the cause of the fire is still under investigation.

Because of the fire, the back side of the building fell over, Kirby said.

Kirby said it’s going to take a while to make sure the fire gets put out because the cotton seed is flammable. He added that the best solution is to dig the seed out, spread the seed on the ground and water the seed down.

Kirby said PFD used its ladder truck to spray water through the top of the house.

“We attacked it from the front,” he said. “The fire was all the way across the building and inside.”

As of approximately 4 p.m., the fire was still burning at the gin.

Kirby said officials will monitor the fire through the night.

More information on the fire will be given later.

An Atmore man was arrested for attempted murder after allegedly shooting toward a vehicle at a residence on Jack Springs... read more