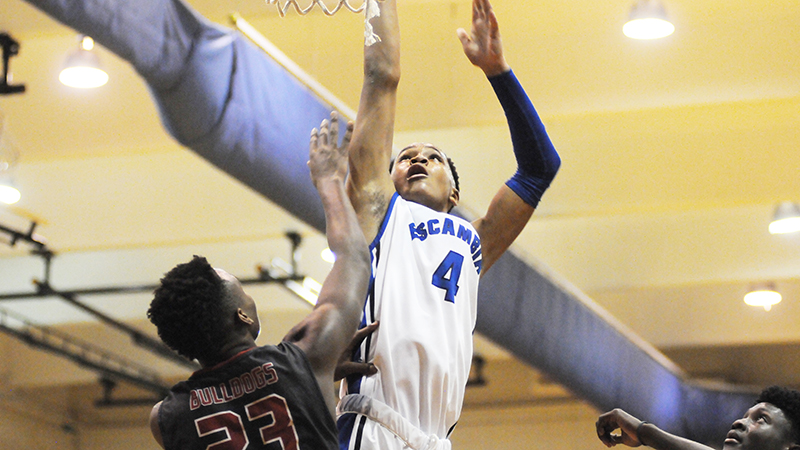 Williams plays with purpose on hardwood

As the sun set on another day, a young Lue Williams could be seen playing basketball at his parents or grandparents’ house.

Now grown up, the Escambia County senior and leading scorer is putting skills he learned growing up on the hardwood today.

At present, Williams is averaging 17.1 points per game. He’s the only player averaging in double figures on the team.

Williams said he grew up in a basketball home, and he started learning and playing the sport from his family. He also plays football, a sport he likes playing as well.

“It started off when I was little,” Williams said. “I was playing with my family — my dad (Luerensley) and my brother.”

On a typical night for the Blue Devils, Williams can be seen displaying his basketball IQ with hard drives to the basket, mid-range jump shots and a 3-pointer if needed.

Williams described his play in a way that also describes what he wants to do in the future.

“My purpose for the game is to — I think about it like if I don’t do this a certain way, it can effect my future,” he said. “Maybe this (game) can be something that’ll help give my mom a new house, and help out with the bills.”

Williams said one day, he’d like to play for the National Basketball Association (NBA).

“I just want to help my family out as much as possible and give back to my community,” he said.

Tomorrow night, the No. 8 Blue Devils (17-5) visit Williamson to play in the semifinals of the Class 4A, Area 1 tournament. ECHS plays UMS-Wright, a team it split with in regular-season area action.

Williams said this is a big game for the team.

“I just want to win to keep the season going, and not go home as a senior,” he said.

Williams said execution, listening to coach Rodney Jackson and not fooling around are the big keys for tomorrow night.

Williams said another key for the team is defending UMS’s Robert Bonham.

That shouldn’t be a problem for the senior as he said basketball has always been his game.

“It’s always ran in my family,” Williams said. “I fell in love with it. I hold it to a higher standard than football.”

Williams is the son of Shirley Williams and Luerensley Williams, of Atmore.