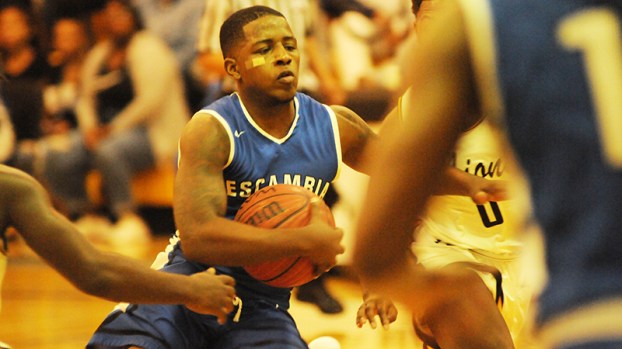 The Blue Devils, led by Lue Williams, Malik Brown and Allen Patterson, who scored in double figures, put together a stellar performance throughout the game.

Williams led with 27 points; Brown added 13 points; and Patterson chipped in 11 points in a contest the Atmore team desired to win.

With the victory, ECHS improves to 19-6, and advances to the sub regional round, where it will host Clarke County on Tuesday night at 7.

Williamson used its speed and good shooting to open up the first period, but ECHS countered in the second to lead 33-29 at the break. In the third, the Blue Devils chose their shots and surged ahead late in the second half in the win.

ECHS coach Rodney Jackson said the boys did a good job of passing and executing, especially in the first half.

“We went to the open play,” Jackson said. “We drained some shots, and then we got back on defense.”
Jackson lauded Williamson’s caliber of players, and added the Lions did a good job of making shots as well.

Early back-to-back 3-pointers in the first period by Williams and A. Patterson gave ECHS a 14-7 lead.

Williamson’s Darrell Brown nailed a 3-pointer a short time later, and was fouled for the extra point to cut the game to 16-15. Brown then got another 3-pointer to go as the Lions led 18-16 after the first period.

Virgil Peoples dished a free throw, and added a 3 later to give ECHS a 24-23 lead midway through the second period. Trevon Lambert got a bucket off a pass to tie the game early in the same period.

Hatch then added a 3-pointer, and Jordaun Patterson found a lane to tie the game at 26-all.

Brown led a short 4-0 run on two foul shots and going from coast to coast on transition for a 30-26 advantage.

From this point on, the Blue Devils started to stretch the game to their advantage with essential buckets.

Brown made a drive to the basket, Peoples made a block and A. Patterson made a 3-pointer with 6 minutes to go to make it 49-41.

Hatch helped lead the Lions way in the third period, but the Blue Devils countered with precise passes and easy buckets to keep extending their lead.

WHS cut the game to 70-67 with 17.8 seconds left on a Horn rebound and putback, but Peoples later got a bucket to ice the game with 8.9 seconds left.

Jackson said the key in the third period was the boys having “ice water” in their veins in choosing their shots.

Atmore man killed after being struck by train

At Atmore man was killed after being struck by a train on Wednesday at the railroad crossing at Martin Luther... read more