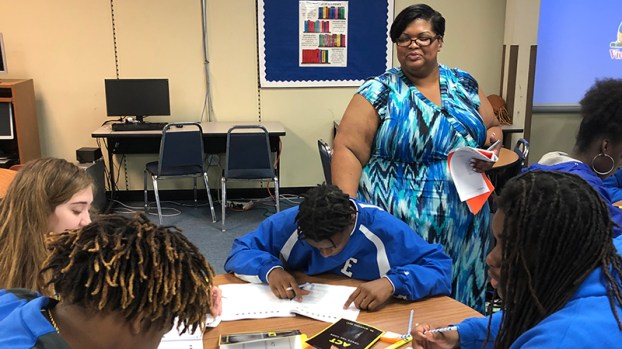 Escambia County High School officials said the failing schools list isn’t an accurate reflection of the students at the school.

“We are making improvements every year,” ECHS Principal Dennis Fuqua said. “The graduation rate for the Class of 2018 was 93 percent, which is an increase from the previous year and above the state average.”

Fuqua added that scholarship money has increased every year over the past six years, and last year’s graduating class earned $5.7 million in scholarships.

“Also, 100 percent of the graduating class applied and was accepted to a post-secondary institution, and 66 students were awarded scholarship money,” he said. “The legislature’s failing schools list is not a comprehensive look at school performance; it is simply based on one group of student’s performance on one day on one test. The federal and state departments of education use a comprehensive system to evaluate school performance through the school report card, which considers factors like student growth, graduation rate and college and/or career readiness.”

Fuqua said ECHS improved by four points and a letter grade on its school report card as a “C” school.

“Obviously there is room for improvement in our school, just like every school in the country, however the failing schools designation is not an accurate portrayal of what is going on daily in our school and certainly should not be a label for our students,” he said.

Fuqua said at present, the school has had two experts in the field come and present presentations to students on how to be more successful on the ACT. Additionally, another person has been on campus the last couple of days for the same reason, he said.

The city of Atmore is one of six communities in the United States that is partnering with Smart Growth America... read more