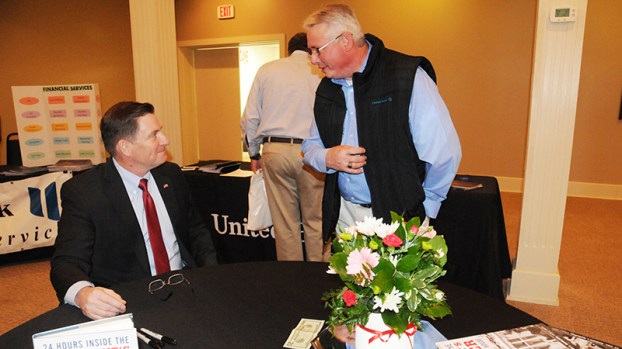 9/11 in a bunker: speaker tells story

Darling was the guest speaker at United Bank’s annual Ag Appreciation Luncheon at The Club on Feb. 14.

During that September day 18 years ago, Darling was holed up in the PEOC (President’s Emergency Operating Center) with former Vice President Dick Cheney and National Security Advisor Condoleezza Rice, handling logistics for all communications coming into the bunker.

Darling gave an account for each hour of the day, detailing what was said and done in the bunker. In fact, he is the author of “24 Hours Inside the President’s Bunker, 9/11/01: The White House.”

Darling said one thing that stood out to him is how powerful the United States is, military wise.

“I never want us to forget the nearly 3,000 great Americans we lost that day,” he said. “Whether they were working at their desks at the Pentagon, or at the World Trade Center or fighting for their lives on that flight — they hardened us in our resiliency to keep going. America is so powerful because there were ordinary Americans doing extraordinary things.”

Darling’s day began at 8:46 a.m. on Sept. 11, 2001 with the news that an airliner careened into one of the two buildings at World Trade Center.

“We saw United Airlines flight 72 coming into view,” he said. “We saw it careen into the south tower at full power.”

Darling said in times is a national tragedy in America, the U.S. Government is equal in every agency in that no agency is more important than the other.

Darling said during times of national tragedy, the president of the United States, then President George W. Bush, needs to be airborne.

“We never want the president stuck on the ground,” he said. “Everybody wanted him in the skies as fast as possible.”

Darling said then, he started working on the high priority phone calls, or 1-Alpha-1s, from government agencies.

Darling recalled how Cheney ordered that United Flight 93 be shot down before it reaches its target of Washington, D.C. He said for a brief moment, they thought they had shot the plane down after it crashed into a field in Pennsylvania.

“Forty ordinary Americans, they rallied themselves together to convince everybody that we need to fight back,” he said. “They organized a fight with Tom Beamer, and we believe they got into the cockpit, and between when the plane went totally inverted and hit at 500 miles an hour, they got hands on the terrorists.

“These heroes owned the first battled against radical Islam,” he said.

Darling said agents on scene found a piece of the aircraft lodged 40 feet in the ground due to the impact.

Darling said the day started to get really busy by about 10 a.m. as the mission then was to ground all flights. He said the Federal Aviation Agency (FAA) and

North American Aerospace Defense Command (NORAD) were responsible of getting flights to land at nearby air fields.

“We fly millions of people around this country every single day,” he said. “On 9/11 it was the first time in history that we cleared the skies over America between NORAD and FAA, we didn’t have one aviation mishap. We didn’t lose anybody to a diabetic coma. During any given hour, we could have up to 300 medevac’s going around this country. Yet, through the coordination with the FAA, all aircraft had new call signs and squawks, and we got everybody where the needed to be with no loss of life.”

Darling said some 12 days after the attack, the aftermath of the buildings was toured at ground zero. He said the carnage along was 13 stories high with twisted metal beams and sewer pipes sticking out of the ground.

Darling, who travels around the country telling his story, said the ethic Americans showed on 9/11 is why he speaks to so many people about the day that changed the world.